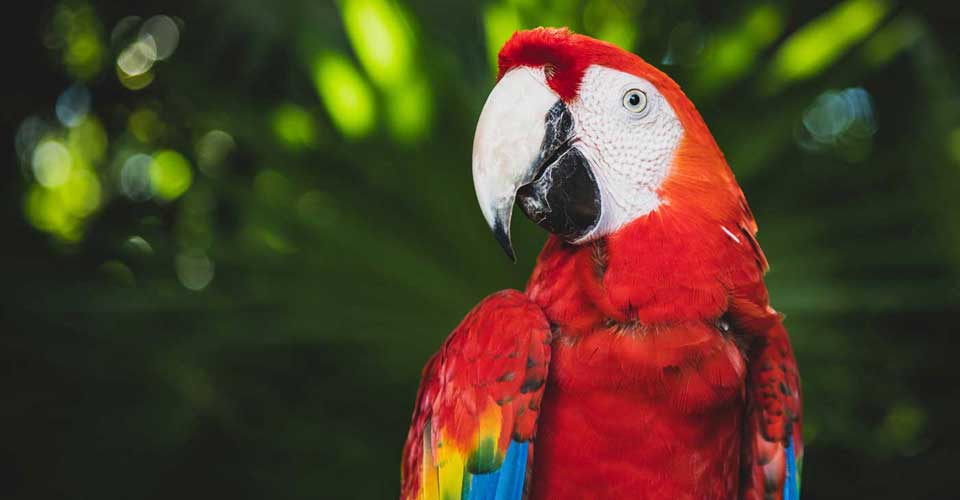 World-renowned for its lush tropical forests and varied landscapes, Brazil is home to most of Latin America’s most emblematic species. Bespoke Brazil specialist Ellie introduces you to the top ten creatures to look out for during your trip:

Brazil is known around the world for its incredible biodiversity. The country is home to the Amazon rainforest, which accounts for over 10% of all species on our planet and also the Pantanal, the world’s largest tropical wetland area. The conditions of the moisture-rich rainforest allow thousands of different species to thrive and make the Amazon the perfect spot for nature lovers to explore exotic flora and fauna. The Pantanal is internationally recognised as the best spot to observe jaguars in the wild but is also home to many other incredible species. From big cats to tiny dart frogs and everything in between, spotting one of these animals in the wild during your bespoke luxury tour of Brazil is a unique experience you will never forget.

Here is our list of animals worth a booking a trip for! 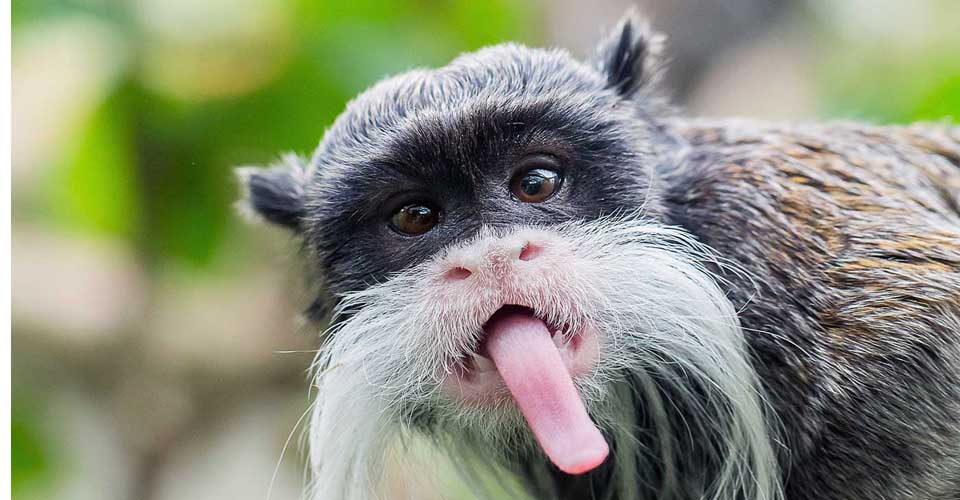 There are so many species of monkeys in the Brazilian Amazon that scientists do not believe that we have yet discovered them all. Among the species they have discovered, however, are howler monkeys, capuchin monkeys, and a variety of tamarins. Many species of tamarins inhabit the Amazon rainforest, such as golden lion tamarins and emperor tamarins. They are usually very small (no bigger than a squirrel) and some of them are quite strange in appearance with quirky moustaches and beards! Capuchin monkeys are New World primates and are known to be friendly and extremely intelligent. Howler monkeys, another regular sighting in Brazil, are the largest monkeys found in the Amazon basin and are extremely noisy. They are known for their raucous calls, which can be heard from 16km (10 miles) away.

Where to Stay? – Our favourite place to stay in the Amazon is Anavilhanas Jungle Lodge, a gorgeous property with chic chalets and bungalows in the heart of the Anavilhanas river archipelago. With a bit of luck, you could spot a monkey in the trees from your room! 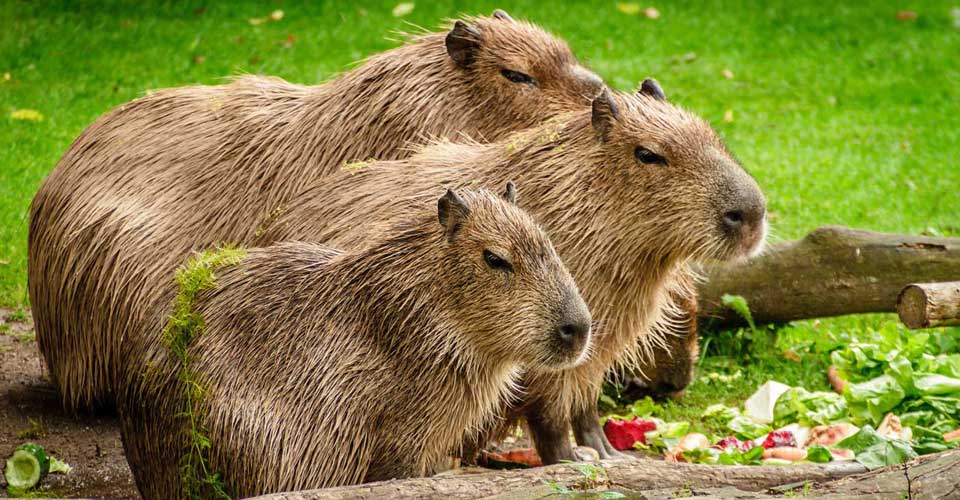 The capybara is the largest rodent in the world, and is found along waterways throughout the marshes, swamps, and lakes of South America. They are a close relative to guinea pigs and have reddish-brown fur and weigh can weigh an impressive 66kg. Capybaras are also semi-aquatic, spending a lot of time in the water. A constant source of water is important to capybaras, who retreat into murky waters to escape from predators like jaguars, anacondas, caiman and harpy eagles. They tend to live in large groups of around twenty individuals in the Amazon and the Pantanal, so you have a good chance of spotting one.

Where to Stay? – At Pousada Rio Mutum in the northern Pantanal, capybaras are often found wandering directly outside the lodge itself. 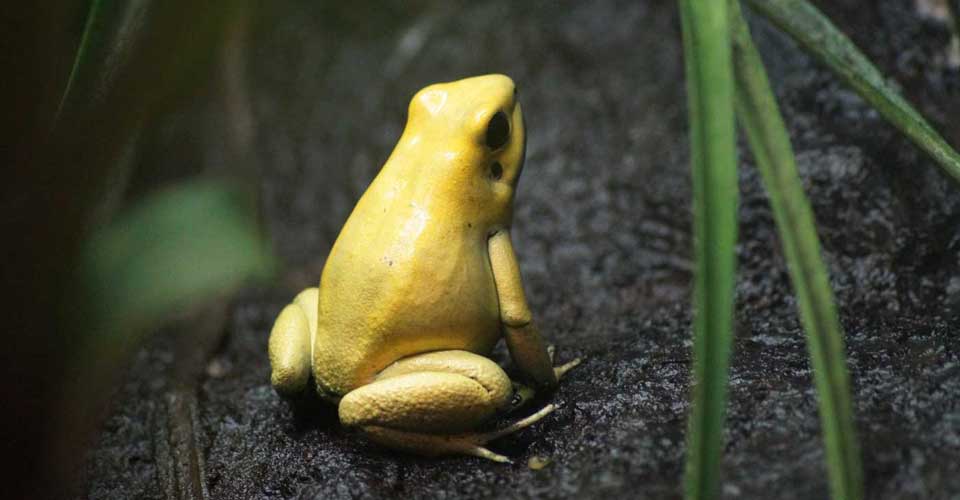 Poison dart frogs are some of the most colourful and interesting creatures you will find in the tropical forests of Brazil. However, their bright colouration and aposematic patterns are a warning to predators. Poison dart frogs are poisonous in a unique way, they secrete poison through their skin, which they use as an incredibly effective defence mechanism. In fact, despite their size (often no bigger than a fingernail), they do not have any main predators in the Amazon because of their deadly poison. The poison of the dart frog can be potent enough to kill ten grown men, so while you probably do not want to get too close, spotting one of these vivid little amphibians is an incredible thing. 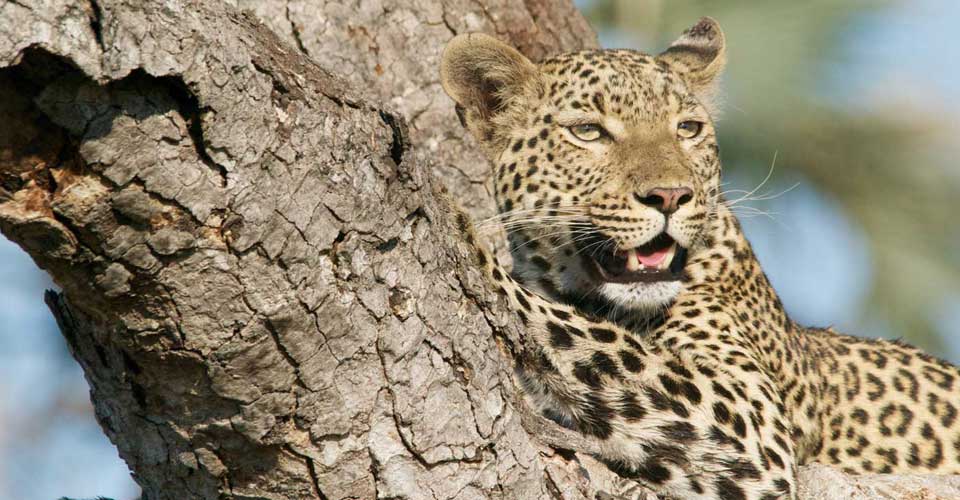 Jaguars are the largest feline species on the entire American continent and the third largest in the world after tigers and lions. They like to live in places with an abundant supply of water, such as rainforests or swamps, and they are known to be great swimmers. They feed by stalking their prey and using their incredibly powerful bite to kill having ambushed their unfortunate meal with the element of surprise. Whilst jaguars are difficult to spot in the Amazon due to their camouflage and propensity for hiding in amongst the dense vegetation, travellers have an excellent change of spotting wild jaguars in the Pantanal wetlands of central Brazil during the dry season from June to October.

Where to Stay? – Caiman Ecological Refuge in the southern Pantanal is the hotel in which you are most likely to see jaguars during your stay. With an on-site NGO called Onçafari tracking and monitoring the cats on the lodge’s vast private reserve, while nothing can ever be promised, it is more likely than not that you will be able to spot one here! 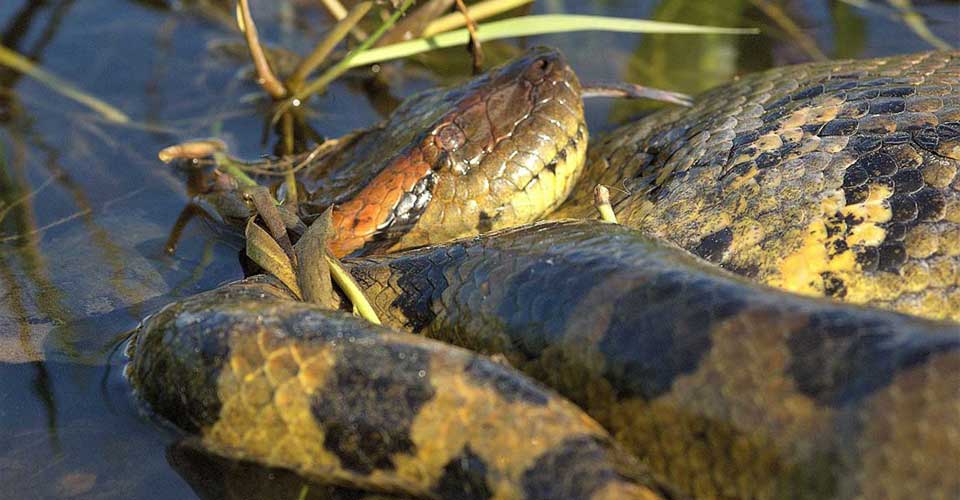 Perhaps the first animal to come to mind when thinking about the Amazon is the anaconda. It is the largest snake in the world, reaching up to an incredible (but scary) 10 metres (33ft) long, weighing up to 250kg and measuring up to 40cm (16 in) in diameter. They are usually a dark green colour, with a lighter yellow colour visible underneath. Anacondas live in trees in the rainforest where they slip down from the branches to attack their prey. They also hide in rivers or ponds to be able to sneak up on animals coming to drink water. Anacondas are constrictor snakes, meaning that they wind around their prey to suffocate and drown them, rather than poison them. Their favourite prey includes unsuspecting capybara, deer, alligators, and sometimes even old, sick or baby jaguars.

A Rainbow of Macaws!

Macaws are beautiful, brightly coloured members of the parrot family. Most macaws have vibrant plumage including bright reds, blues, greens and yellows. The colouring is suited to life in Central and South American rainforests, with their green canopies and colourful fruits and flowers. The birds boast large, powerful beaks that easily crack nuts and seeds, while their dry, scaly tongues have a bone inside them that makes them an effective tool for tapping into the hard shell of forest fruits. Macaws also have gripping toes that they use to latch onto branches and to grab and examine items. The birds sport graceful tails that are typically very long and stunning when seen in flight.

Where to Stay? – At Pousada Boyrá in Bonito, you can enjoy a unique excursion to see hundreds of macaws flock to clay sinkholes to eat the clay every morning. It is a surreal experience, where you are guaranteed to see hundreds – if not thousands – of birds in just one sighting. 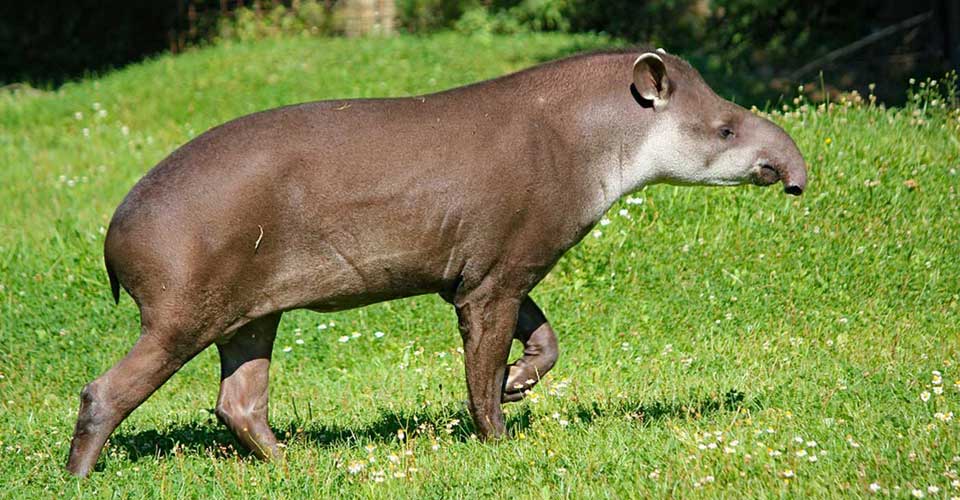 A relative of the rhinoceros, the South American (Brazilian or Amazonian) tapir, is one of four species of tapir in the world. Inhabiting the rainforests of South America, tapirs live near bodies of water and are capable swimmers and divers. In fact, they sometimes run to the water to escape predators. Splayed toes, four on each front foot and three on each hind foot, help the tapir successfully navigate through soggy ground. Weighing between 150-250kg, Brazilian tapirs can measure around 2m (6 ft) in length. Adult Brazilian tapirs have brown coats that vary in shade, with darker hair on their sturdy legs and short, stiff manes along their neck and back. Baby tapirs have brown fur with white stripes to help them blend into the foliage of the rainforest floor. The white stripes fade as the calves mature and learn to fend for themselves. A long, flexible snout helps tapirs grasp leaves, shoots, buds, fruit, and small branches to eat. They generally feed only at night, hiding in the cool forest during the day. You can spot tapirs throughout the Amazon and the Pantanal, usually near rivers and lakes where they go to drink and hide from predators when necessary!

Where to Stay? – Araras Eco-Lodge in the northern Pantanal is one of our favourite lodges in the region, offering a comprehensive menu of wildlife activities in this incredible eco-system. 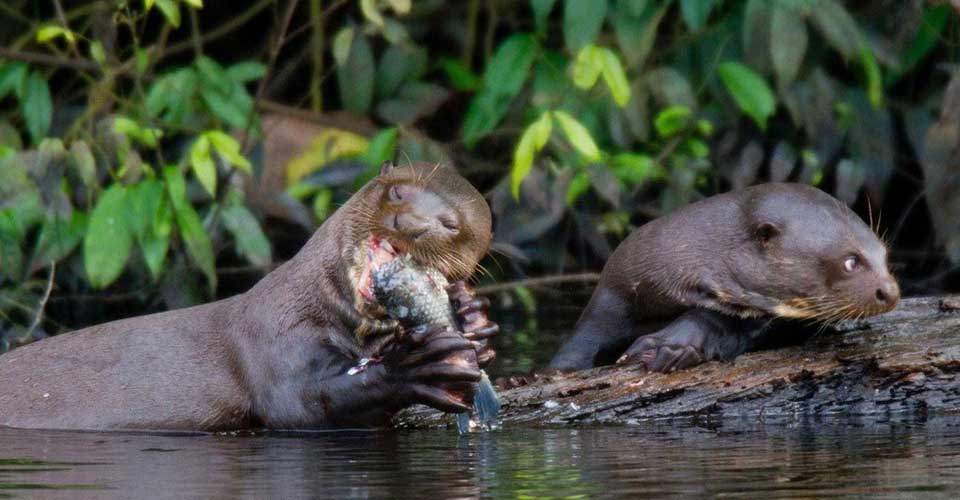 Giant otters are another amazing creature found in the Amazon basin and a real favourite of wildlife enthusiasts travelling to the region. They are much larger than any other otter species, growing up to an impressive 1.8m (6ft) long and weighing over 30kg. Their diet includes fish, crabs and smaller anacondas and reptiles. Their sensitive whiskers help them detect the vibrations of their prey to catch them, even in the pitch dark. Unfortunately, these giant otters are becoming increasingly rare due to the pollution levels in the Amazon. The otters need clean, uncontaminated water to survive, and so increasing human development of the fringes of the rainforest has a devastating effect on their habitat.

Where to Stay? – Cristalino Jungle Lodge is perhaps the best place to say if you would like to see giant otters during your stay in Brazil. The animals are commonly found swimming around the river channels in Cristalino’s private reserve which you can explore as you please during your stay. 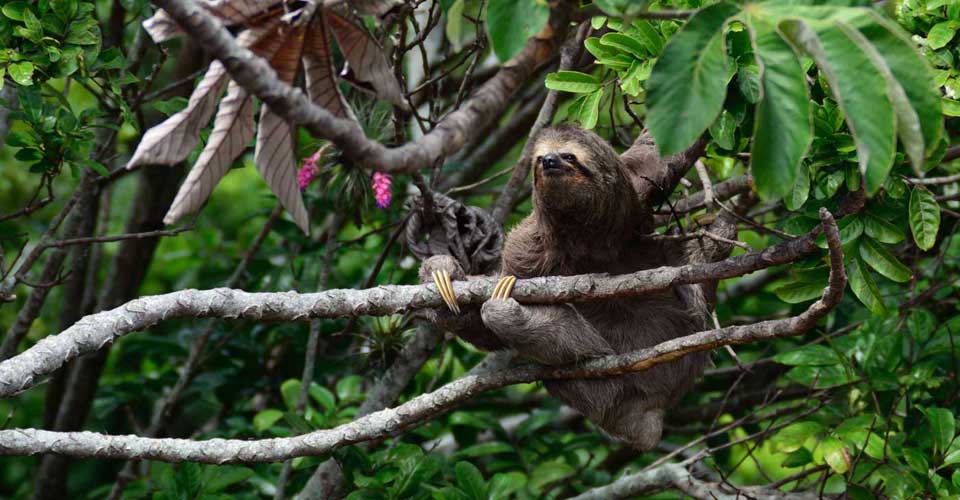 One of the region’s real wildlife crowd-pleasers, sloths are known for their slowness and for spending most of their lives hanging upside down in the trees of the tropical rainforests in Central and South America. The reason why sloths are extremely slow-moving is due to their low-energy diet of foliage, as well as to avoid detection by predators such as hawks and big cats who hunt by sight. There are six species of sloths divided into two families: two and three-toed sloths. In the Amazon in Brazil, both types of sloths can be found. Sloths can be 60 to 80cm long and, depending on the species, weigh from 3 to 8kg. There are few sights as charming as the sloth’s goofy smile as it lollops along from tree to tree in the jungle canopy. 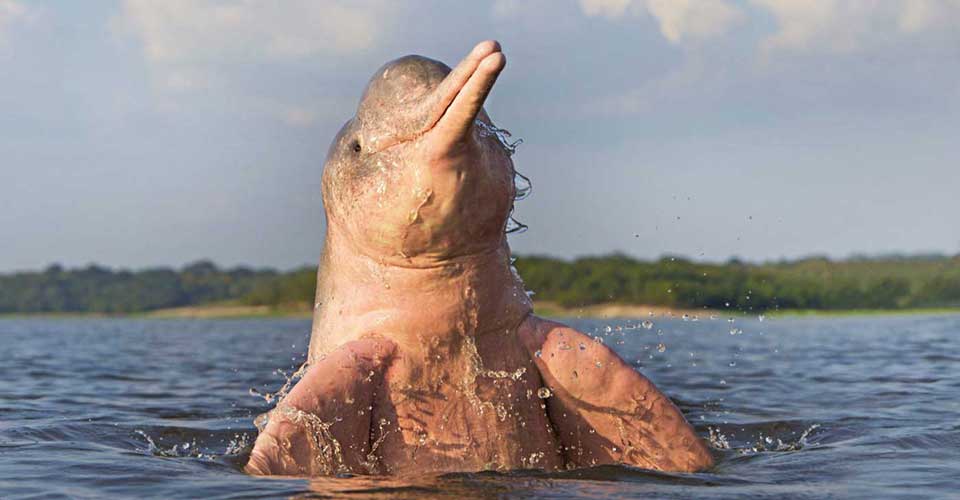 Pink river dolphins are perhaps the most unique and unexpected animals you can spot in the Amazon. They are the largest freshwater dolphins in the world, growing up to 2.5 meters (8ft) long and weighing up to 185kg. Although they are dark grey at birth, they become more and more pink as they grow into an adult, with males tending to have a more intense pink colour than the females. They have one of the widest ranging diets among dolphins, feeding on over 50 different species of fish, such as catfish and piranhas. The same as many other dolphin species, they are friendly and inquisitive animals, so if you pass an area where they are resident, you will no doubt be able to watch them bob in and out of the water and come close to the boat.

Where to Stay? – Amazon Eco-Park, located near Manaus, have a dedicated tour where you can interact with the pink dolphins which we can confirm upon booking.

Are you planning a trip to Brazil? Click here for a sample wildlife itinerary and visit our Amazon and Pantanal pages to learn more about these fascinating eco-systems. Contact one of our dedicated travel specialists to begin planning your luxury holiday to Brazil.