Top 10 Foods to Try on a Holiday to Brazil 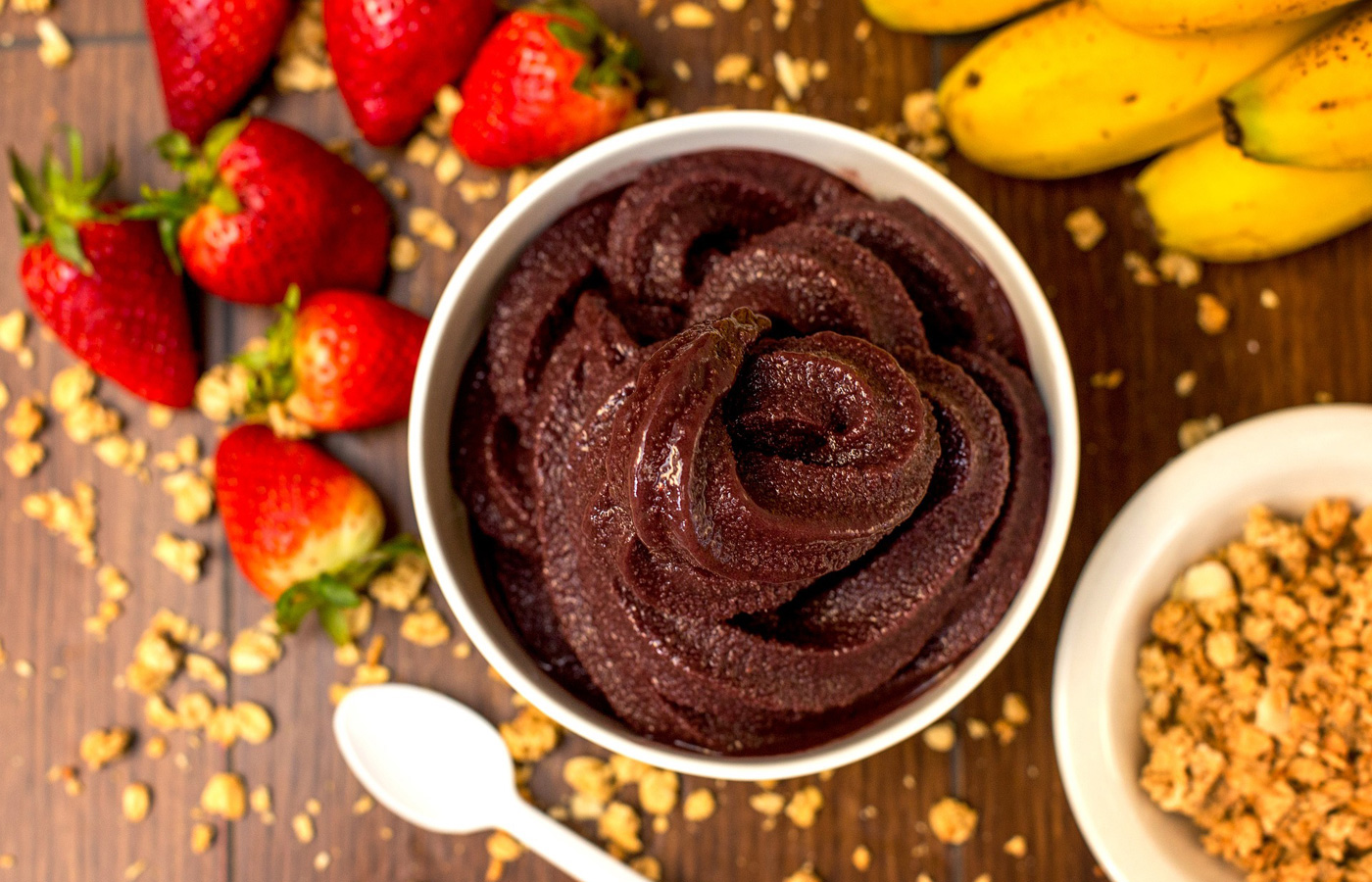 This month, Bespoke Brazil’s resident carioca, Marline, offers up a list of tasty treats that she suggests trying during your luxury holiday to Brazil.

Brazil is a vibrant, diverse and exciting country, and the national cuisine is no less colourful! National dishes are often prepared differently in each region and even have different local names despite normally containing the same ingredients. Each region has its own distinct specialities marked by the differences between Brazil’s melting pot of cultural influences. The Portuguese had a huge impact in shaping modern Brazilian culture and traditions, but the local cuisine has also been influenced by other European, African, South American, and Asian countries over hundreds of years of immigration.

Here are the top ten traditional and delicious Brazilian foods you must try at least once during your holiday to Brazil! 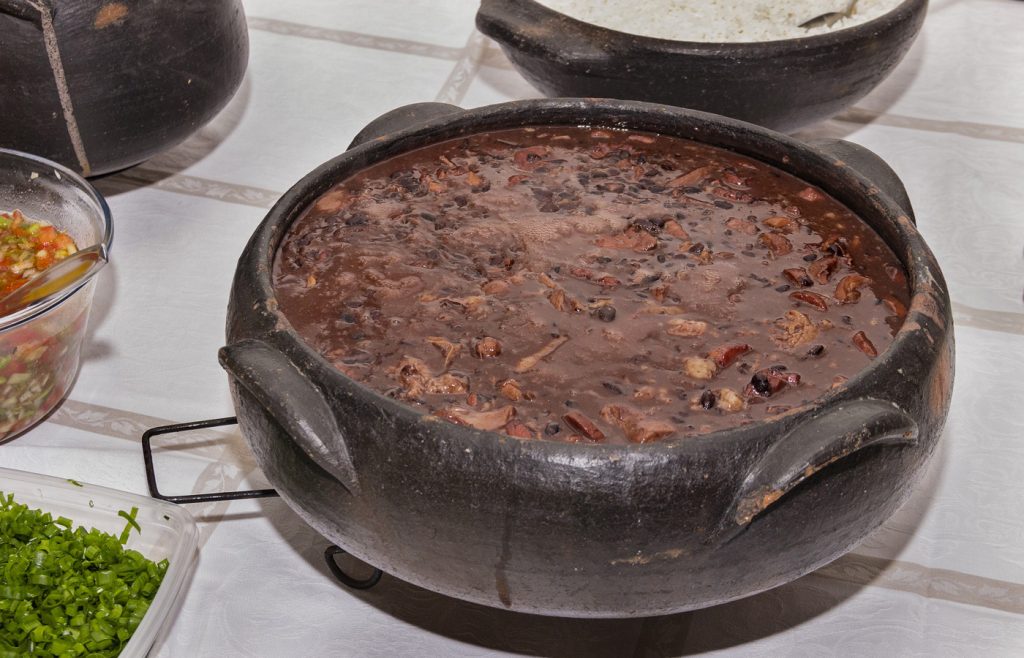 The word feijoada comes from the word feijão, which is the Portuguese for ‘beans’. Feijão with rice is a staple of Brazilian cuisine, served almost daily in any Brazilian home. A common dish in Brazil, this heavy lunchtime treat is eaten in almost every corner of the country. It usually consists of a pot of black beans cooked with various cuts of beef & pork meat, although the truly traditional feijoadas also contain pig’s ears, trotters and other leftover cuts. The dish is served with fried kale, rice, “farofa” (a salty, delicious, side dish made from small pieces of bacon fried with tapioca flour), and some slices of tangy orange for added flavour.

Traditionally, feijoada is made with meat and offal which is slow-cooked with the stewed beans. The whole process can take up to 24 hours. “Caldinho de feijão” is a lighter version of the meal which contains less meat and is usually served in a glass. Feijoada is typically eaten at the weekend with family or a group of friends over an extended lunch period. Given its size and heaviness, it’s a food to be eaten slowly and savoured!

Some Brazilians argue that a real feijoada is not complete without a “caipirinha” – the national cocktail. “Caipirinha” is the name given to an alcoholic drink made with “cachaça“, a Brazilian spirit similar to rum made with sugar cane. The simplest “caipirinha” would contain only lemon or lime juice and a bit of sugar with the liquor, although there are many variations of the “caipirinha” throughout Brazil which are made with fresh fruits like pineapple and passion fruit. The perfect combination for a lazy Saturday afternoon in Rio de Janeiro; don’t miss out on this earthy stew during your holiday! 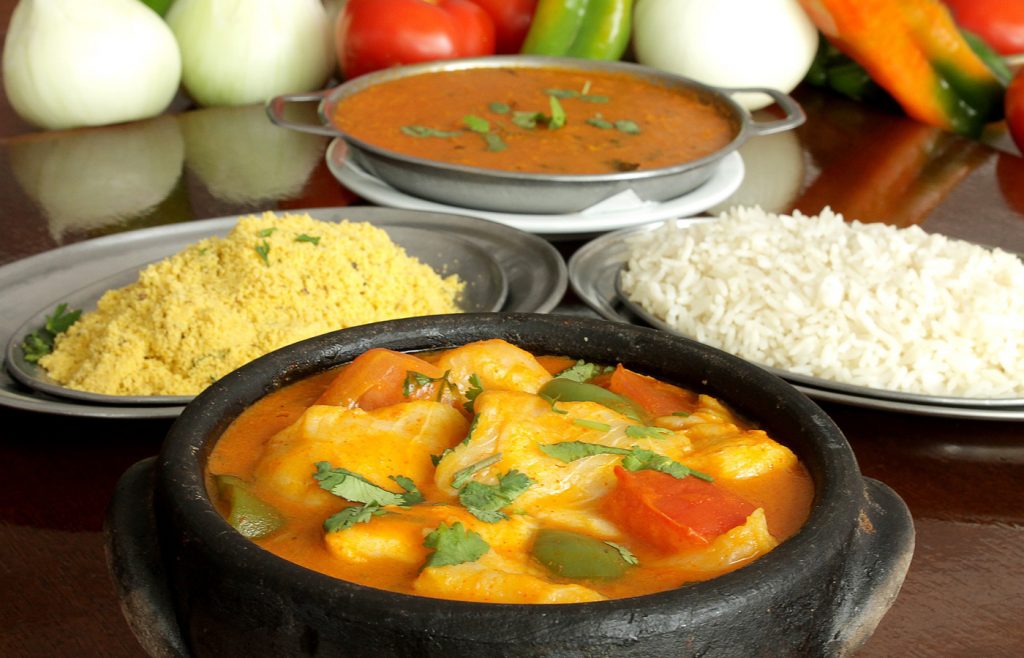 Moqueca is the typical dish of the states of Bahia (“Moqueca Bahiana”) and Espirito Santo (“Moqueca Capixaba”) but is well-loved throughout Brazil. It is so loved by Brazilians that there is a passionate ongoing dispute between capixabas and baianos over exactly which version is superior. In my experience, there is no way of disliking any of the available options. This sumptuous stew is slow cooked with fresh fish, prawns, coconut milk and vegetables. There is even a variation of the moqueca for vegetarians in which fish is replaced by banana da terra (plantains) and more specialist recipes involving species of crab and stingray. Moqueca is easy to make, it has few ingredients, it is very healthy and has a colourful, tropical presentation that will bring any dinner table to life, especially when it is served in large clay pots, as is the tradition. To accompany the stew, serve it with rice and some “pirão” – manioc flour mixed with a fish-head stock. 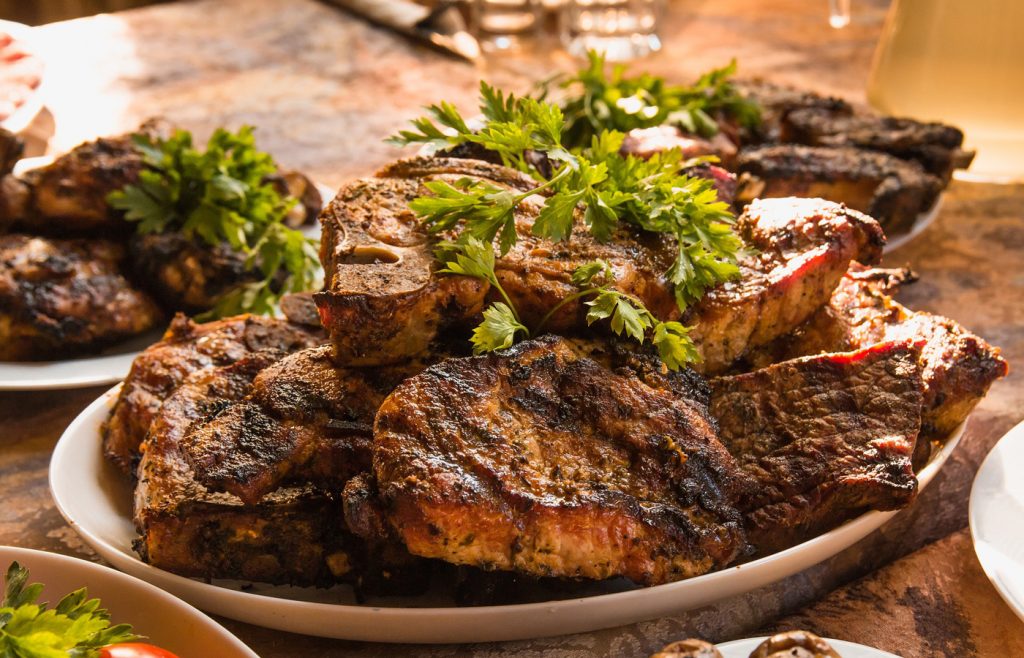 Brazil and Argentina both claim to be South America’s “barbecue” champion. If you have not yet adopted a vegan lifestyle, this is still an unmissable experience to have especially in south-eastern Brazil. Brazilian steakhouses are called “churrascarias“, and the servers come to your table with carving knives and giant skewers of various cuts of quality meats: most often local cuts of beef, pork, lamb, chicken and sometimes exotic meat. Invented by the gauchos, Latin American horsemen who herded cattle in the Rio Grande do Sul region of Brazil and the pampas of Argentina, churrasco is a cooking method deeply connected to this tradition. Today, it remains a very traditional way of life, and is revered in modern Brazilian culture.

A popular condiment for a churrasco is a vinaigrette called “molho da campanha”. The sauce is usually made with water, red and green peppers, onions, and tomato. A tiny amount sprinkled on top the beef is supposed to enhance its flavour. Depending on personal taste, diners will also add “farofa” (a crunchy, toasted manioc flour), onto the meat for additional Brazilian flair. Rice and beans, fried plantains, pão de queijo (cheese bread), and fried polenta are just some of the many traditional small plates that accompany a quality churrasco. 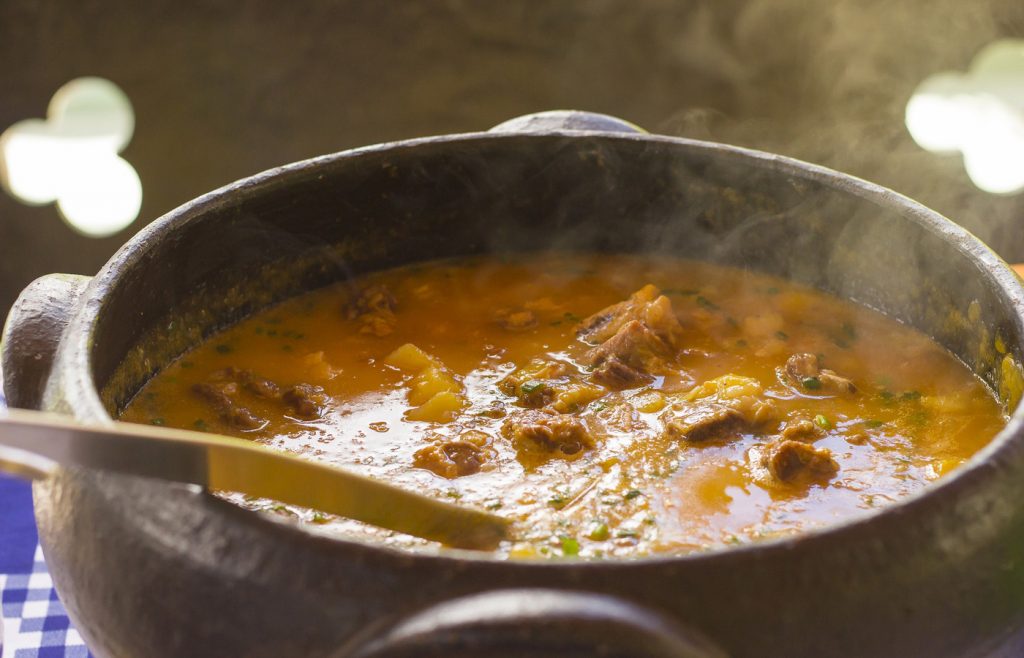 Fish is king in Amazonian cuisine. There are dozens of exceptionally tasty species of fish native to this region: peixe nobre (noble fish), the pirarucu (the world’s largest freshwater fish), and the tambaqui, are all good examples. All are big, meaty fishes and almost boneless, particularly delicious when grilled over charcoal. Also exceptionally good are many smaller fishes such as surubim, curimatã, jaraqui, acari and tucunaré. The freshness and the special flavours of these species of Amazonian fish make local dishes based on these unusual delicacies truly glorious. They are usually served grilled, but they can also be fried, served in tomato sauce, coconut milk, or stewed in tucupi (a truly marvellous sauce, made of fermented manioc juices).

Manioc is also typical of the region and a major component of Amazonian cuisine, besides the abundance of fish. Many dishes incorporate manioc, such as pato no tucupi (duck in tucupi), tacacá (a common shrimp soup), and maniçoba (a dish combining cuts of meat, sausage and chicory leaves). Do you want to try something really exotic? How about piranha soup? The fish that breeds fear in so many people also serves as the basis for a delicious broth typical of the region. A very abundant fish in the rivers and creeks of the Amazon, it features in many routine meals of the local population and enchants tourists with its hearty and warming flavours. 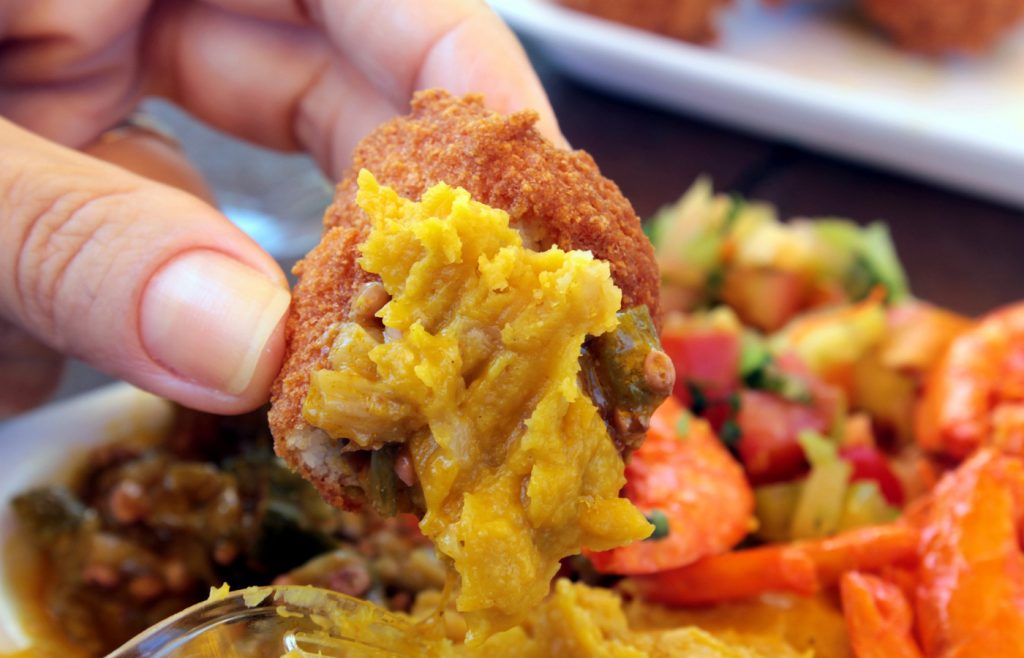 Acarajé, also known as the ‘Bahian hamburger’, is a typical food from the state of Bahia, in northeast of Brazil where local flavours have strong roots in African cooking. Acarajé is a crumble made of peeled beans shaped into large balls which are then fried in palm oil, split in half and stuffed with shrimp, tomatoes, peppers and various spicy sauces. Be careful – in Bahia a dish advertised as spicy can be really very spicy indeed. One of the most calorie-laden street snacks available, acarajé is at its best when served piping hot, fresh from the vat of oil, with a liberal dash of chilli sauce. 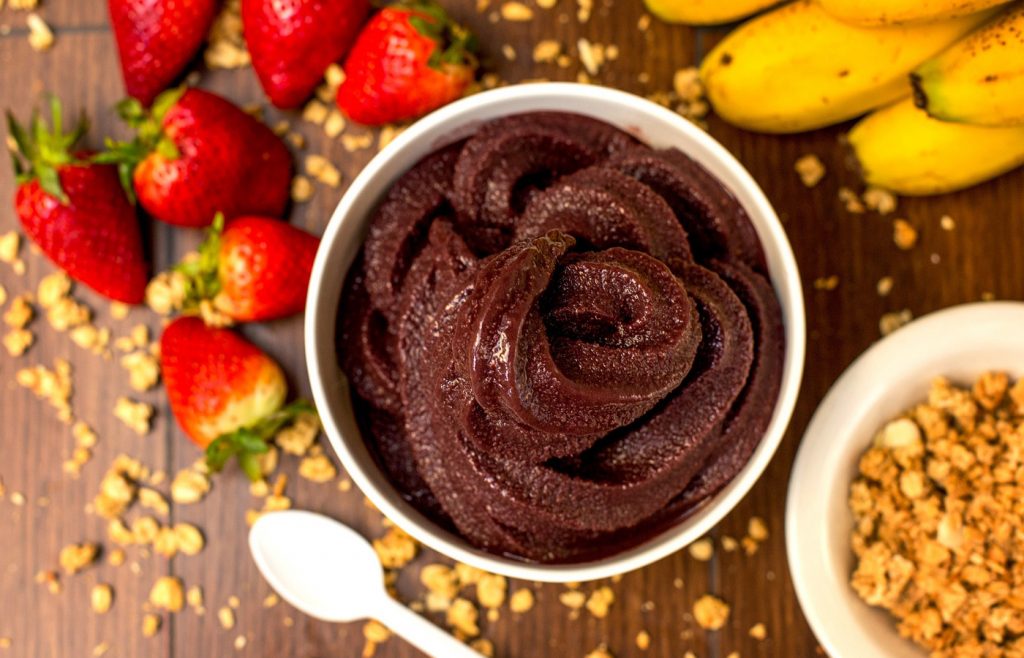 Of all the Amazon’s fruits, the açaí is perhaps the best known, thanks to its ‘superfood’ status. Traditionally eaten by indigenous tribes as a source of energy, this hard, purple berry is also used in Amazonian cooking as a sauce to accompany fish. In the north of Brazil, it is traditionally prepared in its rawest form producing quite a bitter taste; in Rio and the south it is often mixed with syrup or sugar to sweeten it up.

A clever marketing campaign in the 80s thrust it into the spotlight as the energy snack of choice for surfers in glamorous Rio de Janeiro. Served as a sweet, gloopy, frozen sorbet, sometimes topped with granola and slices of banana, or whizzed up in juices, it can be found in every café, bakery, juice bar and supermarket across the country. 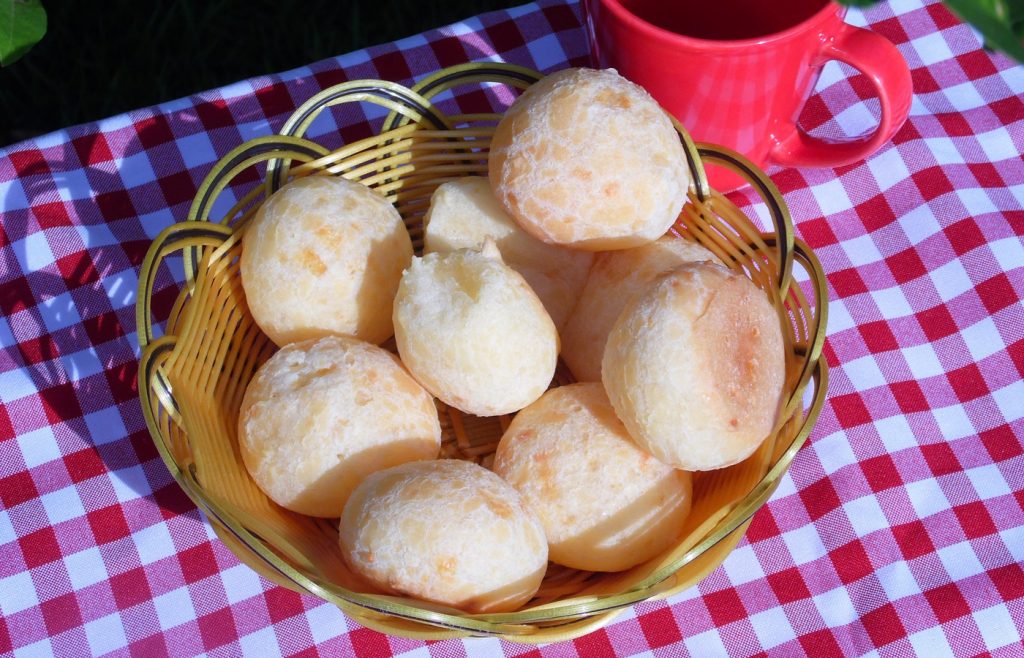 Cheese and bread – two staple favourites the world over. Pão de queijo, or Brazilian cheese bread, is a small, baked cheese roll. This popular snack originates from Minas Gerais, a region in the south of Brazil. The dough is made from cassava flour and queijo minas, a salty Brazilian cheese. Crispy on the outside and soft and chewy on the inside – it is a perfect combination when they are served fresh from the oven and gobbled up with a piping hot cup of Brazilian coffee. 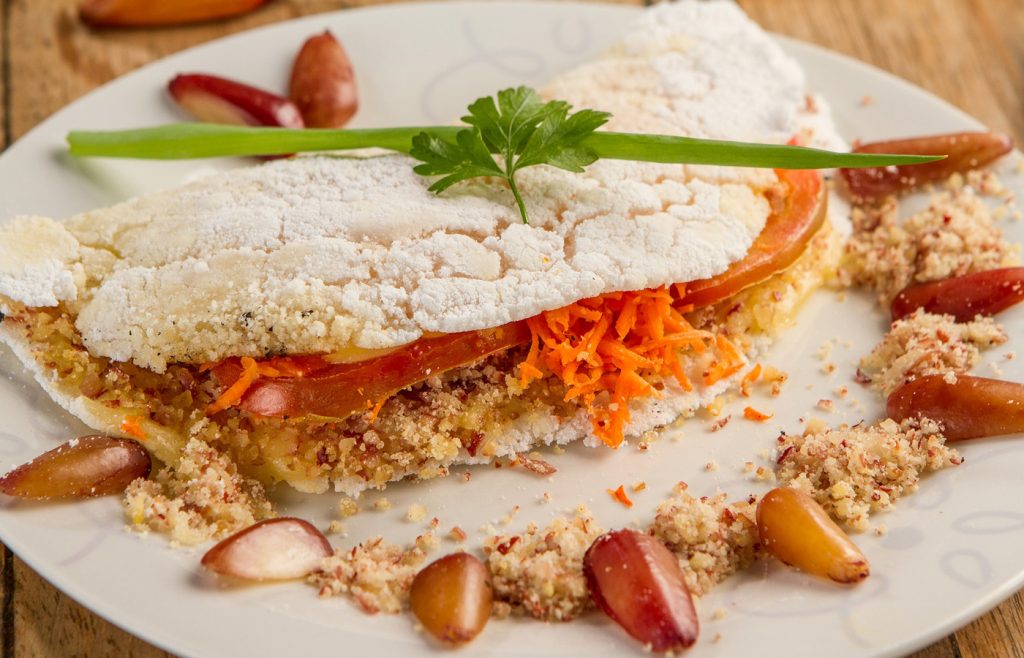 Tapioca and its culinary uses have an indigenous origin, but with time it has spread throughout the whole of South America and is a key ingredient of typical Brazilian food in the northeast. It has become very famous in recent years for being a great substitute for bread, for those who are gluten intolerant. It’s often served as street food as a savoury crepe-like snack with cheese, tomato and ham or as a sweet treat with chocolate, strawberries, bananas, nuts, dulce de leche or guava jelly with soft cheese. 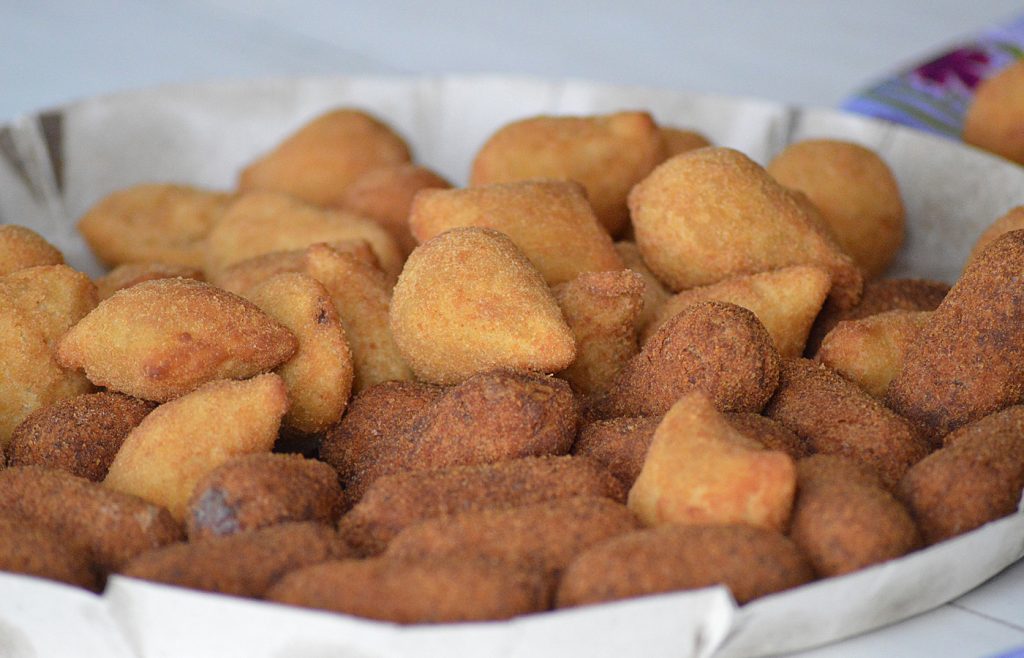 The majority of Brazilian people have a serious relationship with good beer. It is a national passion! In Brazil it is must be served so cold that chunks of ice stick to the bottle and with an appetising assortment of fried snacks! Popular choices include: pastéis (deep-fried parcels of crisp pastry, filled with melting cheese, minced beef or creamy hearts of palm); bolinhos de bacalhau (literally ‘little balls’, made with salted cod); aipim frito (fried cassava crisps often used as an alternative to French fries); and coxinhas (‘little thighs’ made of shredded chicken in mashed potato and deep fried in golden breadcrumbs in a shape that resembles a voluptuous thigh). These indulgent treats won’t win any prizes for their nutritional value, but they are the perfect partner for a cold half-pint of the local brew and ludicrously tasty! 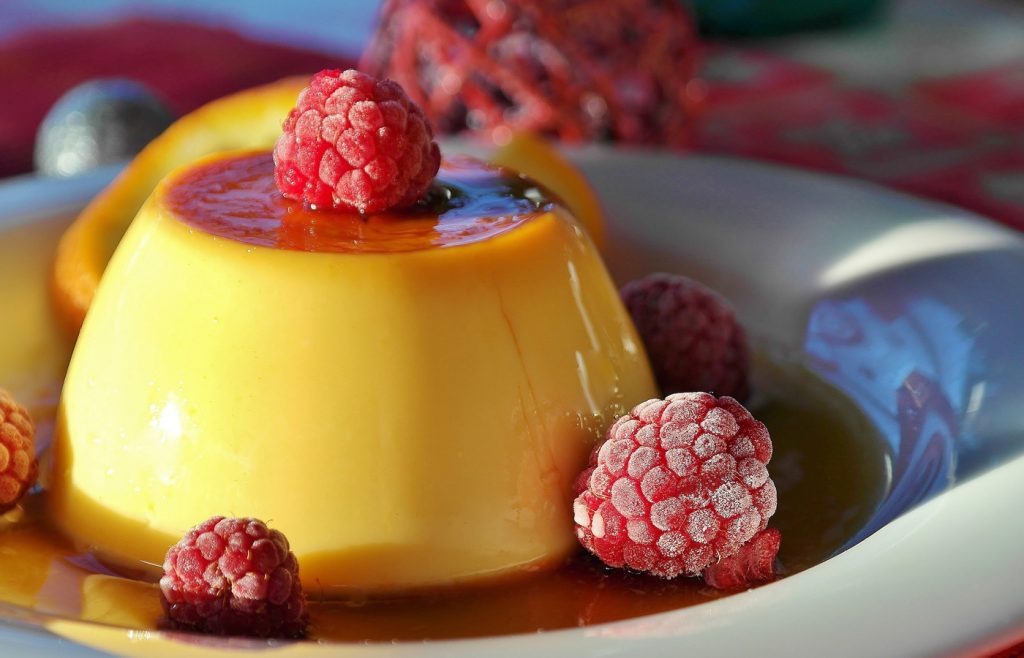 Brazilian’s certainly have a sweet tooth. The ‘brigadeiro’ is the national truffle of Brazil and is the most widespread dessert in the whole country – a staple of family celebrations from children’s birthday parties to anniversaries and weddings. It consists of a blend of condensed milk, butter, cocoa powder and granulated chocolate for the topping. Other favourite deserts to sample are ‘pudim’, a gelatinous desert made of condensed milk, milk and eggs; ‘bolo de rolo’, a thin sponge cake rolled into a log with a filling of guava, marmalade or dulce de leche; ‘canjica’, a porridge made with whole white maize kernels and cooked with coconut milk, sugar and cinnamon until tender; and ‘pe de moleque’, a square shaped sweet made with peanuts and caramel.

For anyone who is willing to immerse themselves in the multiple culinary cultures of Brazil, experiencing some of these national treasures, with their exotic aromas and flavours, is a huge highlight of any trip!

For more information on Brazil and how to do it, view some sample itineraries here. Contact us today to begin planning your bespoke luxury holiday to Brazil!