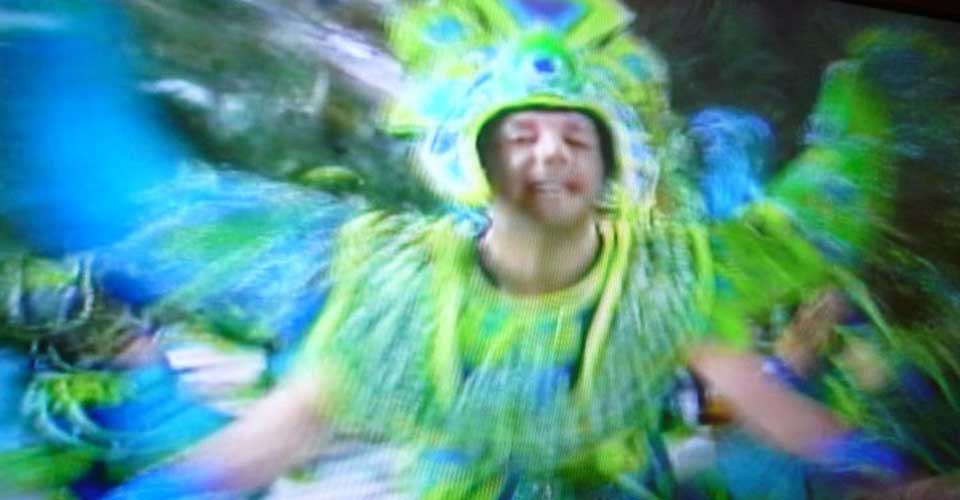 I am hot, sweaty and with aching feet but with a huge smile on my face from ear to ear that won’t go away. I’ve just taken part in the Sambadrome parade at Rio Carnival which can only be described as the best experience of my life.

Watching the Sambadrome parades is an incredible sight as the noise and colour is overwhelming. The parades begin at 9pm and finish anytime between 5am and 6am with most people doing their best to stay until the end. As each parade goes past the crowds get to their feet, singing, dancing and cheering on their favourite samba school.

Although watching the parades is a fabulous experience, dressing up and taking part in the parade is something else. That’s exactly what I had the chance to do in February as an honorary member for the night of the União da Ilha Samba School and it is a night I’ll never forget.

Each year every samba school chooses a different theme for the parade and for União da Ilha it was Darwinism. This led to me being in a section of the parade with about 80 others, all dressed as peacocks, parading behind a 20 foot high tortoise!

The costumes were delivered to my hotel and a small group of us, who were also in the parade, headed for the Sambadrome. We travelled to central station via the metro which is an experience in itself but squeezing in to crammed carriages in a large costume is a lot of fun when everyone is in a party mood. On arrival at the Sambadrome we were kept in a holding area and shown what to do which involved some simple samba moves and the importance of keeping in line with the dancers to your side and in front. 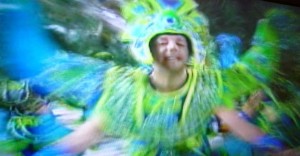 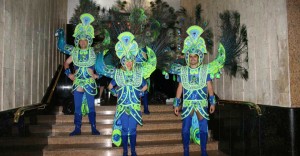 As we entered the arena my overriding memory was of a wall of light and a cacophony of sound from 80,000 people which increased the further along we went. All the crowds were singing, chanting and taking photos of us whilst the sweat was pouring off me as I focused on my footwork.

Check out our You Tube video here

As I crossed the finished line I had been dancing non-stop for 40 minutes and didn’t want to stop. Everyone was cheering and hugging each other in jubilation and the constant buzz continued as we headed to find a bar still wearing the costume which I got to keep.

I have travelled all over the world but this, without doubt, was the best experience of my life. I even managed to get on TV as the photo above shows!

You too can take part in the Rio Carnival parade and Bespoke Brazil offers you a chance to have this experience.

If you are heading to carnival, contact us to find out how.