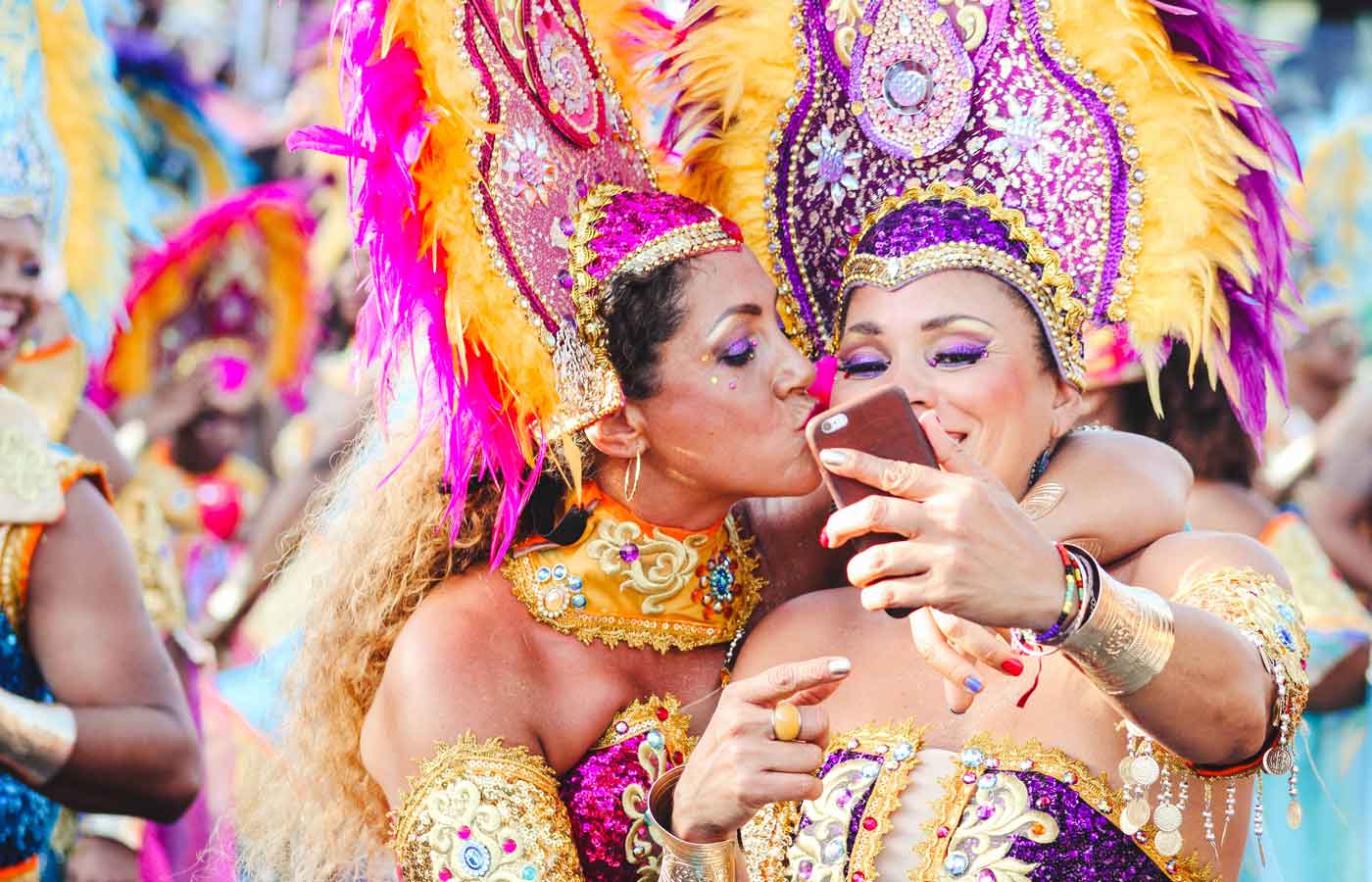 Rio Carnival is now only a few weeks away and there’s still a chance to visit and take part in the largest party on the planet.

Rio Carnival always begins on the Friday before Lent and finishes officially on the Tuesday (Shrove Tuesday/Pancake Day) when shops are supposed to re-open although often it’s Wednesday before everyone goes back to work. As Easter moves each year, so does Rio Carnival and in 2019, Rio Carnival begins on Friday 1st March as Easter falls relatively late in the calendar. 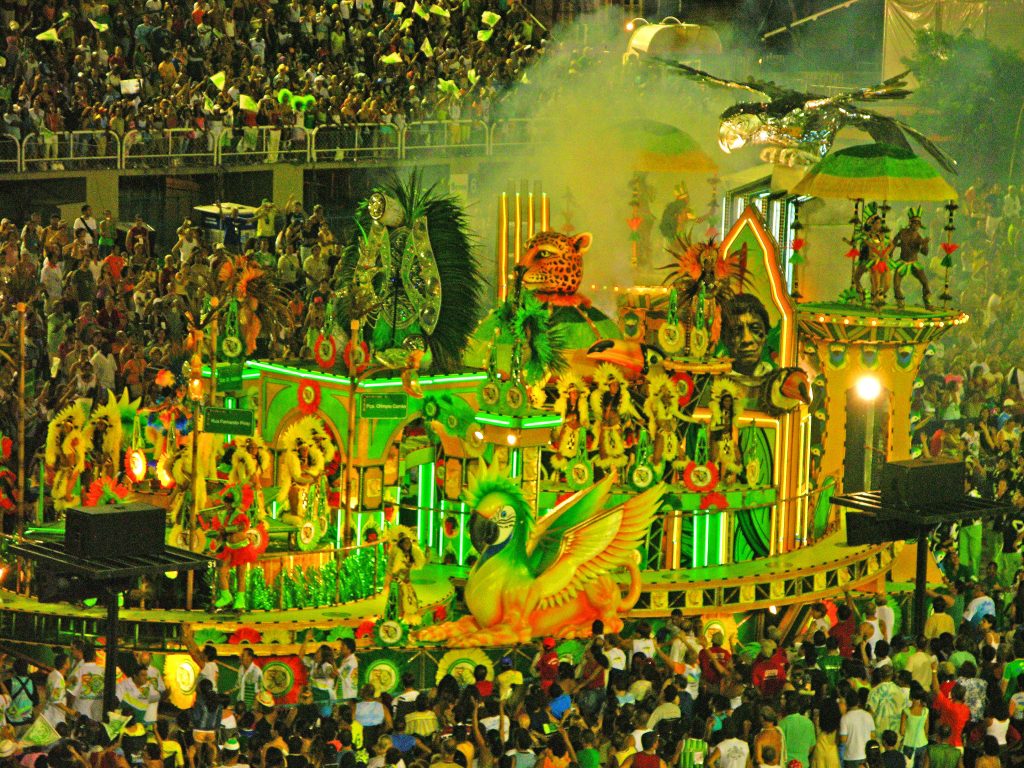 For the uninitiated, Carnival essentially takes 2 different formats in Rio de Janeiro. There is the party on the street and the competition in the Sambadrome.

During the 5 days of carnival there are around 500 street parties in the city. Some of these are small localised community affairs whereas some are very large raucous affairs such as the Banda de Ipanema and Cordao do Bola Preto, both which take place on the Saturday and attract over a million people to each, many of whom will be in drag! The street parties are free to join in and are a bit like Notting Hill carnival in the UK and I suppose are the real face of carnival.

The second format is the competition which takes place in the purpose built Sambadrome, a 700 metre long runway with stands either side where the samba schools of Rio parade on the Sunday and Monday nights. As a tourist, these are a must see on at least one night.

On both Sunday and Monday the top 12 samba schools parade (6 on each night) and the school with the best performance is crowned as a winner. The parades begin at 9pm and finish usually at around 5am with many people staying until the end. There are various options for seating in the Sambadrome from very cheap seats, a tourist sector through to private boxes depending on your desired levels of comfort. 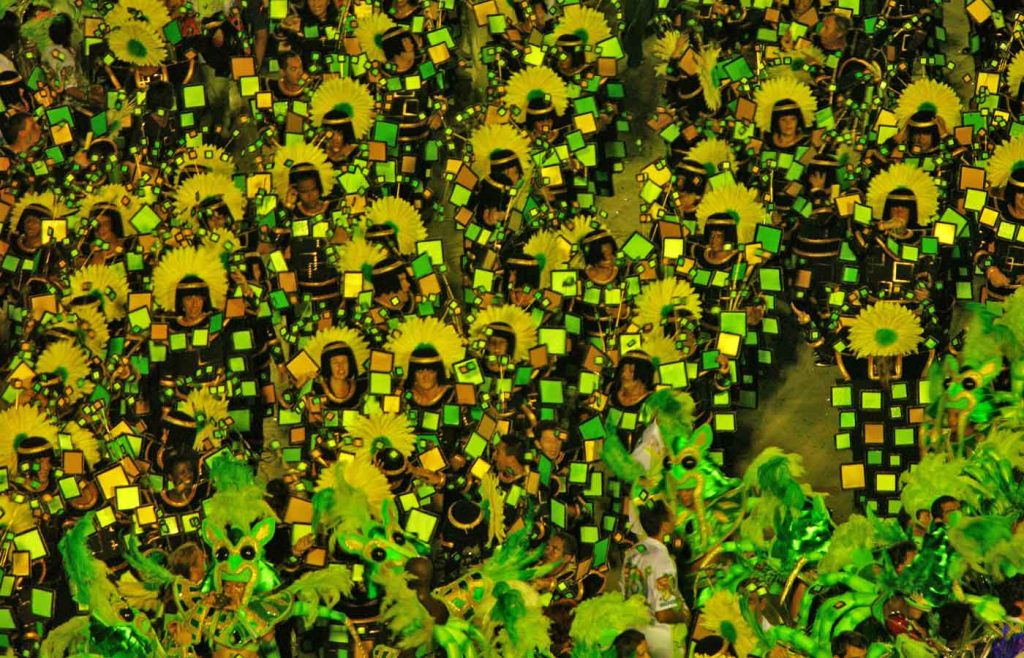 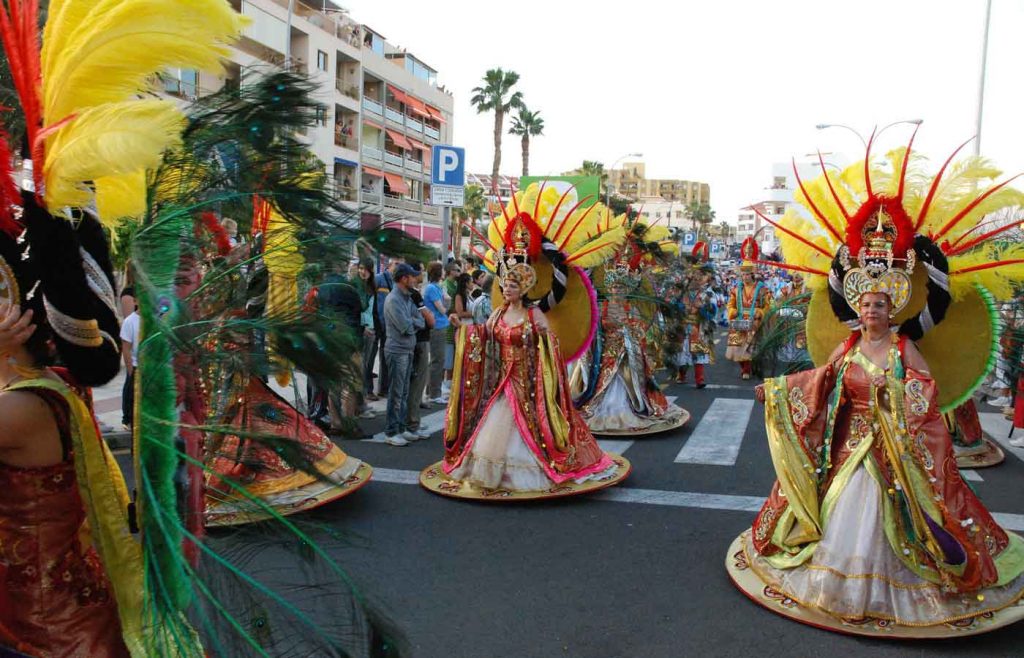 TOP TIP: Personally I avoid the tourist sector as although the seating is better, carnival is best enjoyed with Brazilians who throw themselves into the party, rather than tourists. We can arrange all types of tickets and a private guide for the Sambadrome.

If you are looking for something really special then we can also give you the chance to take part in the carnival parade itself, an amazing once in a lifetime experience. We provide you with a costume and you are one of the many people who form part of a wing of a samba school. I took part a few years ago and was one of the best experiences of my life, 40 minutes of non-stop dancing in front of 80,000 people all singing and cheering you on. We deliver the costume to your hotel and a guide will escort you to the Sambadrome.

Your guide takes you to the start point of the start point of the parade where you meet your ‘leader’ for the section you will be in and teaches you what you need to do, essentially stay in formation and move your feet! The dancing time is usually around 40 minutes and then at the end you will exit the Sambadrome and have the chance to keep your costume and head to a local bar.

There’s a YouTube clip of me dancing in the parade here to give you an idea of the experience – https://www.youtube.com/watch?v=_Zh_3mL8RL8 – I appear at 1:11 lurching in front of the camera!

The costumes generally cost around £600 for the experience and below are some images of previous clients taking part in the parade. 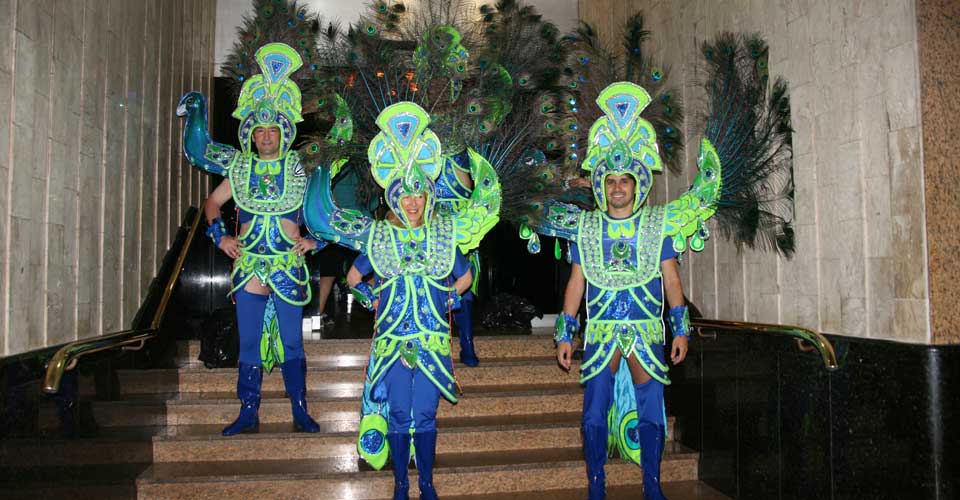 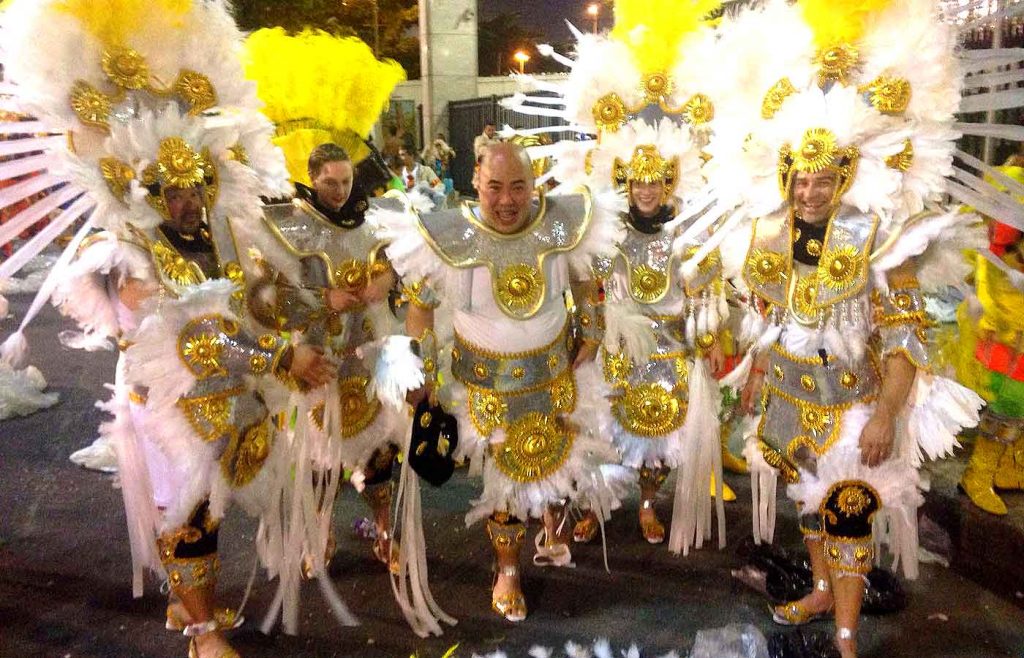 It’s not too late to enjoy Rio Carnival this year and there’s still a few costumes available to take part in the parade so get in touch and experience the best party on the planet!

We can of course arrange guided tours of Rio de Janeiro too and if you have 7 nights in Rio then I would arrange tours of Corcovado and Sugar Loaf on the days outside of carnival as tourist numbers as the main sights, plus the queues, will be smaller.

If you have 10 days then I’d suggest combining Rio de Janeiro with either a nearby beach or perhaps you could fly down to Iguassu Falls where I would recommend staying at the Belmond Hotel Das Cataratas which is located right in front of the Brazilian Falls allowing you 24 hour access to the falls when the park is otherwise close to visitors. Wake up early and you can explore the falls on your own and feel as though you are the only people in the park, it’s quite special. Whilst there also take the trip to the Argentine side of the falls and take the speedboat to the base of the falls which will get you soaked and is a lot of fun! 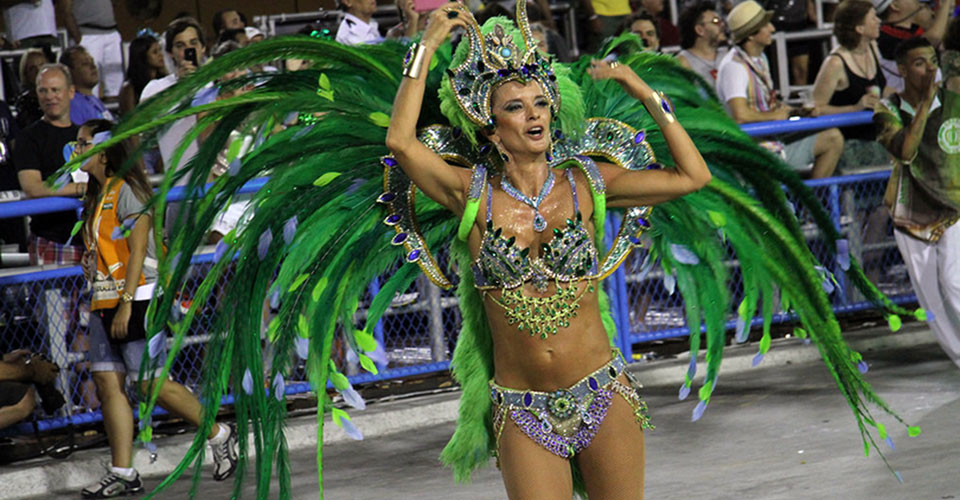 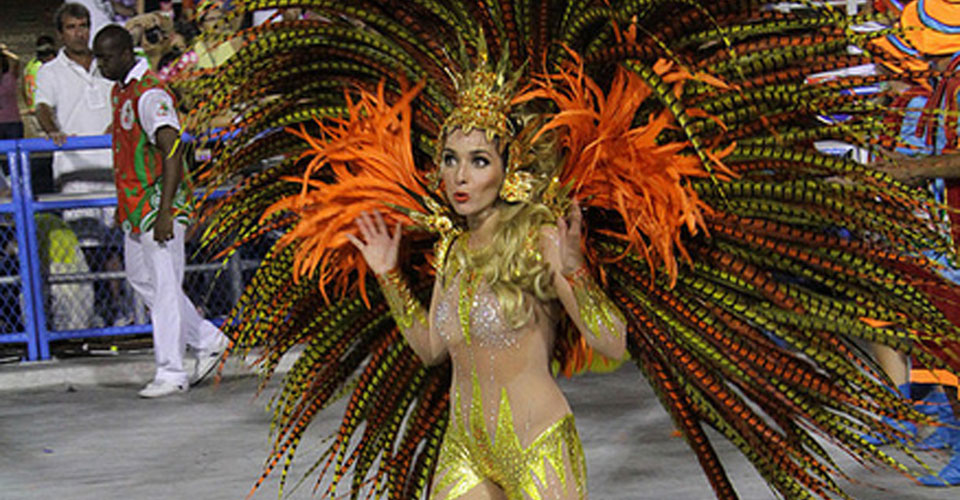 Or alternatively you could head to somewhere like Paraty which is a beautiful colonial town wedged between the ocean and the rainforest and steeped in history so there’s something for everyone.