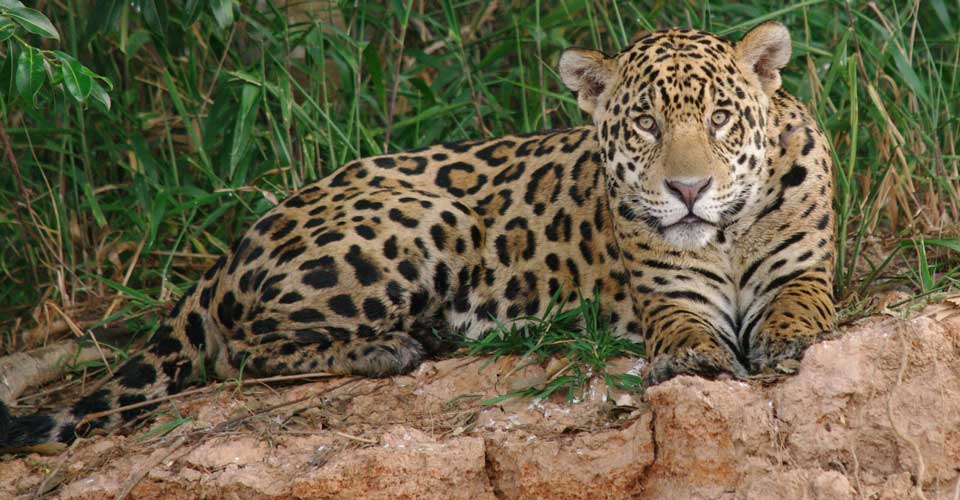 We recently paid a visit to the northern Pantanal and during our stay took the opportunity to go in search of Jaguars in Brazil.

Brazil is widely regarded as the best place in the world to see jaguars and despite the jaguar being one of the world’s most elusive cats, your chances of spotting one are quite high in certain parts of the Pantanal, given some time and some patience. For wildlife enthusiasts spotting an Onҫa Pintada, the Portuguese for jaguar, is high on the list of animals to see in the wild.

There are a number of jaguar houseboats which ply the Cuiaba and Piaxim rivers close to Porto Jofre at the end of the Transpantaneira Road and enable tourists to live aboard and go in daily search of jaguars on the smaller boats that they tow behind the main vessel. A preferred option in our opinion is to base yourself at Porto Jofre in a hotel by the river and venture out in small speedboats in the morning and afternoon allowing 2 or 3 days of exploration.

On this occasion we didn’t have quite so much time and had arranged a one day express visit to hopefully see a jaguar.

We set off early from our lodge in the northern Pantanal, departing as the sun came up at 6am to make the 2 ½ hour journey south along the Tranpantaneira Road to the Cuiaba River at Porto Jofre. It’s a bumpy journey along unpaved roads but hopefully the road will remain that way so as to keep away too much traffic and maintain more wildlife. The journey along the road is quite a safari in itself as there is always lots to be seen out of the windows especially for bird enthusiasts but we also spotted numerous caiman, capybaras, snakes and were lucky enough to see two giant otters swimming in the one of the many small rivers and streams which criss-cross the Pantanal floodplains. Our guide, Larissa, grew up in the Pantanal and had been guiding since her teens. She was just as excited as us about the possibility of seeing a jaguar but stressed that sightings are by no means guaranteed.

Upon reaching Porto Jofre we met our boat driver for the day, Jose, and set off in a small 6 seater speedboat. We sped off along the river which at points must be about 100 metres wide until we reached some smaller tributaries where jaguar sightings were hopefully more likely. For the first couple of hours we saw nothing other than caiman and capybaras, both of which are tasty prey for the jaguars. Jose then received a message on the radio, Onҫa! 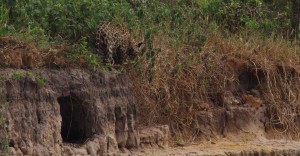 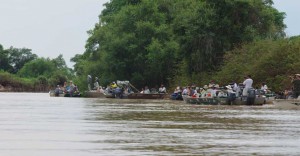 The boat drivers in the area all communicate with one another once a jaguar has been spotted so that as many tourists can see one as possible, after all people pay of a lot of money for the privilege. Jose opened up the throttle and we were soon racing along the river winding our way to hopefully be in time to see a jaguar. Larissa, our guide, told us to have our cameras at the ready and as we rounded the bend and cut our speed we could see a jaguar creeping along the river bank towards a family of capybaras. The male jaguar was looking for lunch. 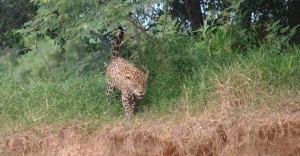 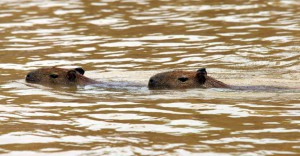 There must have already been 15 boats similar to ours containing some of the largest camera lenses I’ve ever seen. The boats all politely found their own space enabling a good view for everyone with cameras all aiming towards the jaguar, hopeful of seeing a kill. The jaguar remained poised, with eyes transfixed on the capybaras, until he was spotted when his potential prey began their distinctive grunting sound to warn their family who all immediately took to the water for safety. Although jaguars are seemingly good swimmers, it all seemed a bit of an effort to jump in the water so on this occasion the capybaras lived to fight another day and the jaguar continued wandering along the shoreline in search of food. 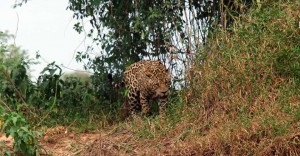 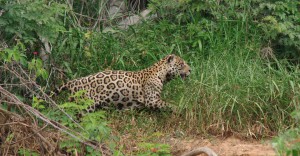 As the jaguar made his way along the riverbank, the assorted boats full of cameras and binoculars duly followed all nudging ahead of each other to secure the best photographic spot. We were able to get incredibly close to the large male jaguar without disturbing his passage in search of food until he finally disappeared into the forest away from the shore. 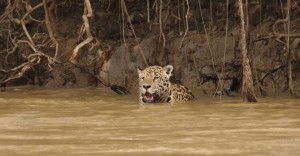 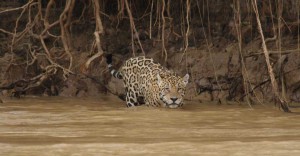 The boats dispersed in different directions and we were soon all alone once more on the river. Lunch and drinks were provided on board but we didn’t want to stop specifically for lunch as were keen to see more wildlife. We passed more and more capybaras and caiman as well as some beautiful kingfishers, toucans, parrots and the giant Jabiru stork, the symbol of the Pantanal. 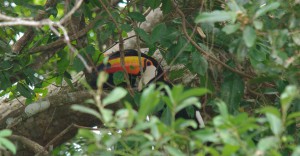 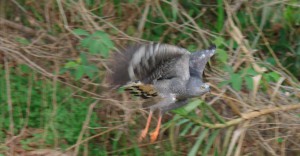 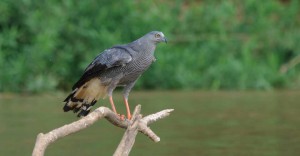 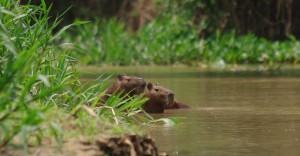 As the hours went by it seemed as though we would only see the one jaguar and then all of a sudden I spotted one and yelled out “jaguar”! The driver slowed down and turned the boat around and we were faced with another male jaguar seemingly resting under the branches of a shady tree looking across the river. This is apparently a common place to spot jaguars in the Pantanal in the middle of the day, resting in the shade, not bothered by the presence of a boat. It seemed strange to our guide and boat driver that he quickly arose and started wandering the riverbank. He must be hungry, said Larissa, our guide as the jaguar headed towards a beach area where a family of capybaras were lazing in the sun. The jaguar soon disappeared so we went ahead to the beach in anticipation of the arrival of the jaguar. We waited and waited but nothing. Perhaps he had crossed the river so we ventured back to the spot we first saw him. Still nothing. Further searching proved fruitless but Larissa and Jose were convinced the jaguar was still present. Nevertheless we went away further down river and stopped at a beach for a swim. 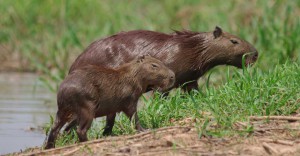 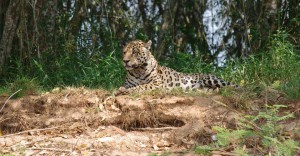 Once last try, said Larissa, as we headed back to the original sighting spot. As we approached Jose pointed to something in the water. It was the jaguar! He was presumably waiting for us to depart so he could cross the river and as he reached the other side we realised what he was staring at all along, a female jaguar!

Our guide and driver were hugely excited as seeing two jaguars together is very rare and doubly exciting as it was mating season. Mating was certainly their intention as the two jaguars found a hidden spot in the forest and began mating which was a noisy experience for the male jaguar! 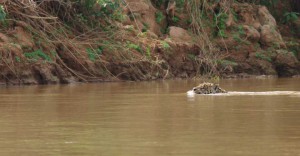 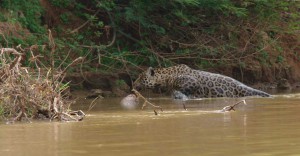 After their mating had finished the two jaguars laid in the shaded forest away from proper view of our gaze with us only able to make out their occasional swishing tails. The jaguars would only move once the female has decided to depart so we waited round to catch a further glimpse of them together. Once again we waited, and waited, and waited but the female was content to laze around. Calls on the radio indicated that another jaguar had been spotted close to Porto Jofre but we didn’t want to join the crowds so waited in hope that the mating couple would re-appear. They didn’t.

We headed back towards Porto Jofre to join the other boats viewing a jaguar but after no more than 2 minutes of speeding along the river, Larissa spotted another jaguar! Amazing! We assumed it would be one of the mating couple but no, this was a different jaguar entirely and another male. The jaguar prowled along the bank for a few metres and then came to a rest under a tree in beautiful evening light. There he laid, watching 3 capybaras across the river, who were anxiously looking back but we wasn’t in the mood for hunting. It was a photographer’s dream. We must have spent 30 minutes there with no other tourists. It was truly incredible. 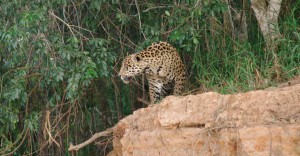 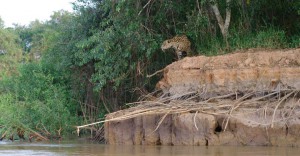 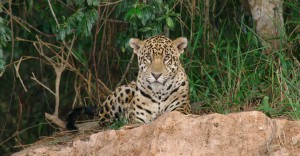 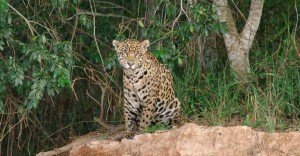 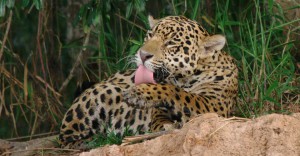 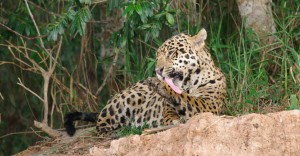 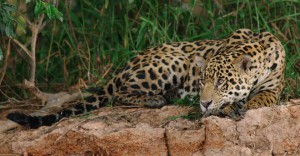 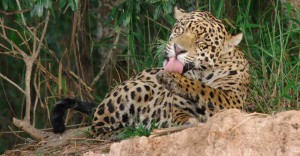 The time came for us to leave as the day was drawing in and so we said goodbye to the jaguar and raced back to Porto Jofre before it got dark. En-route we encountered the 15 or so boats which were gathered together with their long lenses all pointing towards another jaguar. The view was slightly hidden and a bit too far away for my lens to properly capture and as it was crowded we did not stay long although it was special to see another one nonetheless. It is rare that tourists can be so complacent about sighting a jaguar however we had been so fortunate already that none of us were overly concerned.

As we returned to Porto Jofre and for all the journey back to our lodge, all we could speak about was how incredibly lucky we had been to see 5 different jaguars in one day, including a mating couple. Our guide Larissa was keen to point out that the Pantanal is not a zoo and such sightings were incredibly rare so we all considered ourselves blessed on what was a fabulous day. 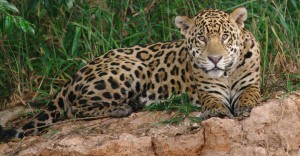