Festas Juninas: How to do Brazil’s Harvest Festivals

Home » Culture » Festas Juninas: How to do Brazil’s Harvest Festivals 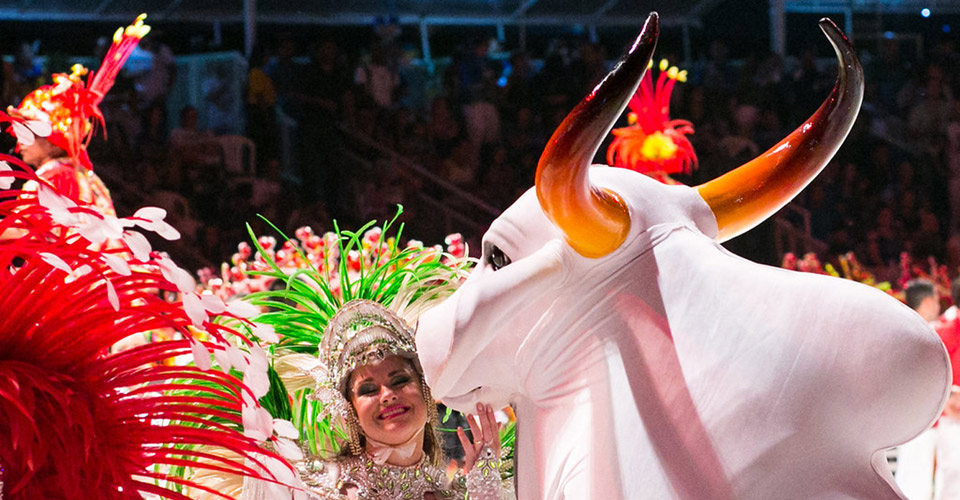 Brazil’s unbelievable number of celebrations and festivals that vary from region to region are just another element that contributes to the unique cultural richness of this vast country. Bespoke Brazil’s Marline, our resident Brazilian, explains the Festas Juninas, Brazil’s biggest harvest festivals:

For Brazilians, June and July means decorations, costumes; and great food and drink because these are the months of the famous Festas Juninas. These Brazilian festivals are the second most important popular expressions of Brazilian folklore and popular culture after the world-renowned Brazilian carnival that takes place just before Lent.

The celebrations of São João also known as the Festa Junina take place from mid-June until the end of July at the beginning of the Brazilian winter. In some cities, (Brazilians are never ones to leave a party early), the festivities even continue until late August. June is a month for the commemoration of some of the most important saints in the Catholic faith, namely Saint Anthony, Saint John the Baptist and Saint Peter. The devotion to all three saints was originally introduced to Brazil by Portuguese Jesuit priests during the colonial period and lively celebrations based on early modern festivals for the saints’ days are still enjoyed today. The annual celebrations were also influenced by European midsummer celebrations, including elements such as the creation of a large bonfire as known as a fogueira.

Festas Juninas take place all around the country, but in the more traditional northeast they are the most popular and impressive. Just like carnival, some cities have bigger festivities and events than others. The nordestinos celebrate the arrival of the winter rain which is essential to their agriculture since droughts are a serious issue in that region of Brazil. Those attending the festivities will be treated to typical Brazilian food, will dress up like farmers, enjoy huge bonfires and dance the quadrilha (a Brazilian-style kind of square dancing).

In the state of Bahia, located two hours’ drive from Salvador, the town of Cachoeira is perhaps the host of one of the most traditional festas with forró music and 3-person bands called trios, typical of the Brazilian northeast, often involved in the action.

In the Chapada Diamantina the São João Festival in Mucuge is worth a mention, as he is the town’s patron saint. One of the most interesting popular events held each year is the festival held every August by the Irmandade da Boa Morte (Sisterhood of Good Death) – this commemoration is organized by descendants of 19th-century slaves who founded an association of black women devoted to the cause of abolition.

People in the south and southeast of the country are known for large-scale events organised by the local communities, churches and universities. Festivities have clear similarities to those in the rest of the country, as people run various fairground-style stands with either food or games and quadrilha dances are enacted to entertain visitors. The bonfire is also a traditional element expected at every Festa Junina.

In the fair northern state of Maranhão, the Festa Junina is celebrated with different variations – known as sotaques – such as the Bumba-meu-Boi. Bumba-meu-Boi (Ox Festival) is a type of carnival with parading groups similar to the famous celebration in Rio before Lent. São Luis, the state capital, is famous for its Bumba-meu-Boi, a fascinating and wild folkloric festival. Derived from African, indigenous and Portuguese influences, it is a rich mixture of music, dance and theatre, with fantastic, colourful costumes and masks. Like the other Festa Junina folk dances, Bumba-meu-Boi also serves a narrative function. Performers tell the story of a slave who is left by a plantation owner to care for his bull which then dies and is later revived. A black velvet bull costume embellished with sequins and ribbons is worn by one of the dancers during the spectacle. The festivities take place all over Maranhão, and in São Luís on its colonial streets every June. New songs, dances, costumes and poetry appear every year and attract visitors from across Brazil and around the world. 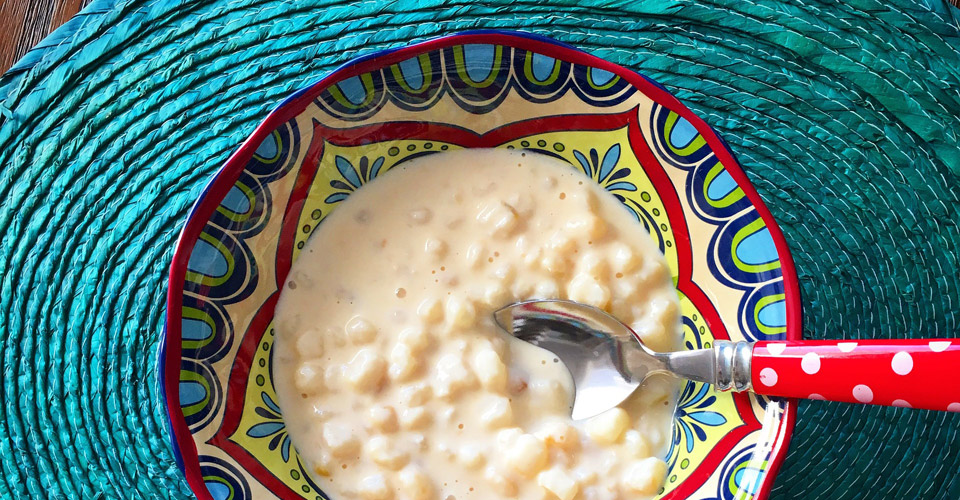 Canjica – A typical Brazilian food made of corn, eaten during the Festas Juninas

As June is the month when corn crops are harvested, the majority of sweet and savoury snacks and cakes are made of corn as well as copious amounts of liquors and local delicacies. The Festas Junina’s menu includes pamonha, corn on the cob, ‘bolo de fubá‘ (corn cakes made from finely ground rice or corn flour), ‘canjica‘ (corn mixed with condensed milk and peanuts, then topped with cinnamon), ‘cocada de colher‘ (shredded coconut mixed with condensed milk and butter), ‘pé-de-moleque‘ (a type of sweet treat made with hard toffee and peanuts), and ‘paçoca‘ (candy made out of crushed peanuts). It is also time to drink the typical ‘quentao’ (a hot drink made with cachaça, ginger, sugar, cloves, and cinnamon), a Brazilian version of mulled wine. 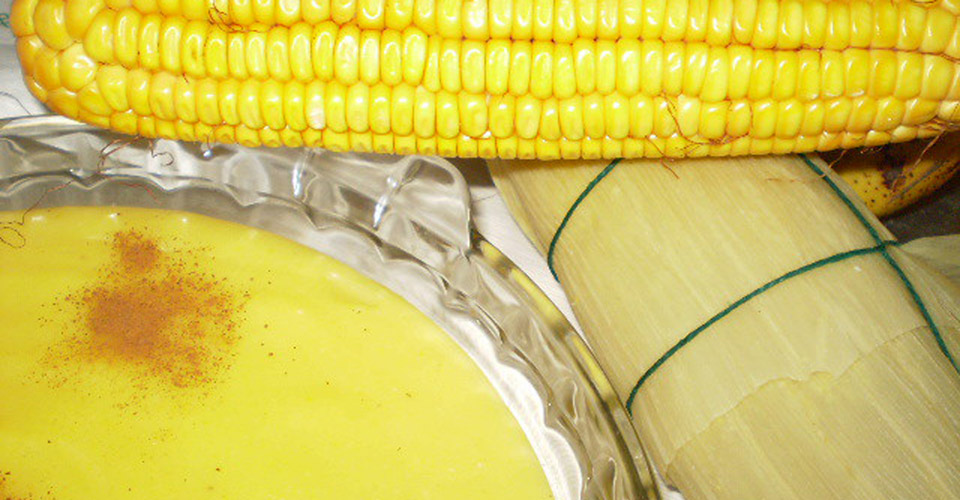 Festas Juninas are very lively and colourful so the venues are usually decorated with multicoloured flags arranged in rows of garlands. The typical clothes worn at the Festa Junina are inspired by vintage rural fashion as the themes of harvest and rain are central to the festivities. The men wear jeans with braces and checked shirts while women put their hair up in ponytails, wear checked dresses and paint freckles on their faces. Accessories include straw hats, braids, fake moustaches and fun heavy makeup. 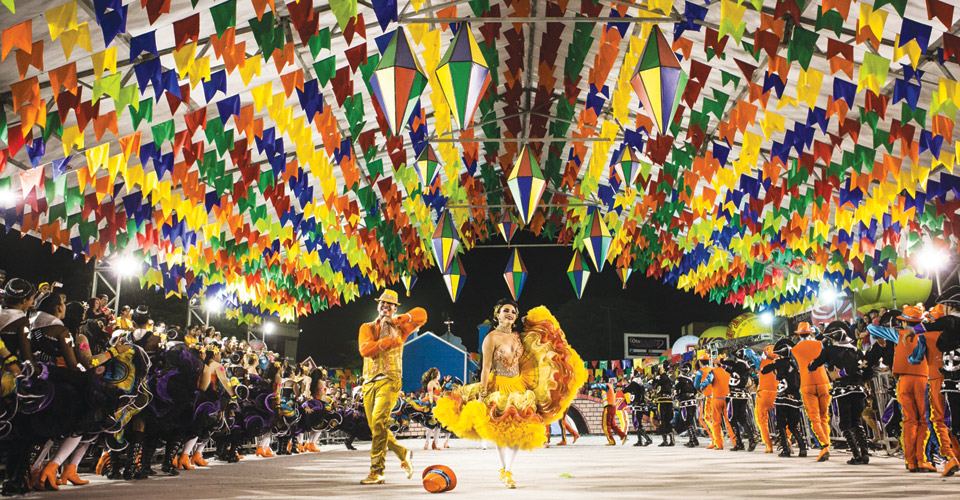 Quadrilha folk dances are a vital component of the Festa Junina. Inspiration is taken from the 17th century French quadrilles, a type of traditional square dance, but the Brazilian adaptations are more complex. Every year, national, regional and local quadrilha dance competitions are held all around the country. Dances involve up to 30 colourfully dressed performers, while a chosen ‘bride and groom’ act as the central focus of the spectacle. Before the actual dance starts, a theatre performance tells the story of a single man who is pressured into marrying a girl that is carrying his child. Everyone participates by singing traditional songs, including the lovers’ families, the police, the priests and everyone who comes from their ‘village’. Vibrant and highly convivial, these jovial dances are without a doubt the highlight of the festival.

If you are planning a summer trip Brazil, it should be no trouble for you to find a Festa Junina to attend! Have fun!

Are you planning a trip to Brazil? Contact us today to speak to one of our dedicated travel specialists and begin designing your bespoke luxury trip.

« Casa Cairucu – A Slice of Paradise on the Costa Verde
Luxury Hotel of the Month: Pousada Trijuncao »