Holidays to the biggest party on the planet

Virtually every town or city in Brazil celebrates carnival, the roots of which can be traced back to Roman and Greek times and was brought to Brazil by the Portuguese in the middle of the nineteenth century. Occurring annually just before Lent, today’s carnival has changed from masquerade balls to wild revelry, street parties and in the bigger cities a competition between the samba schools in organised parades.

There is the famous Amazon carnival, the Boi Bumba, which takes place in Parintins in July whereas the rest of the country celebrates carnival in February or March with the biggest carnivals being held in Olinda, Salvador, Florianopolis and Sao Paulo. Without doubt though, the biggest and the best is Rio Carnival.

Rio Carnival begins on a Friday and lasts until Shrove Tuesday and is like no other in the country because of its size, its flamboyance, and its huge street parties.

The street parties, known locally as blocos, can attract over a million people to the bigger parties such as Cordão do Bola Preto or the Banda de Ipanema both of which are traditional blocos and famed for cross dressing men and women. During Rio Carnival over 500 blocos take place throughout the city and wherever you walk you will stumble across a localised party where the neighbourhood gets together with children and grandparents alike taking part.

The main event during the carnival period in Rio takes place in the Sambadrome. This is the stadium of samba where every year the top samba schools in Rio de Janeiro battle it out to win the coveted title of champions. During Rio Carnival the top 12 samba schools parade on the Sunday or the Monday night (6 on each night) in what is an amazing sight to behold. Each samba school can contain up to 4,500 participants split into smaller sections (known as alas) which dress according to the theme of the samba school and follow elaborate floats. Each samba schools takes roughly 80 minutes to complete the 700 metre parade runway. The actual rules specify each school is allowed to parade from between 65 minutes to 82 minutes meaning from the moment the first participant of the school enters the runway until the last member crosses the finishing line. If a school overruns the time then they are penalised points as part of their general points assessment. The special groups which parade on the Sunday and Monday nights begin parading at 9pm and the final school usually finishes at around 5am.

For spectators there are numerous seating options.

The Sambadrome is split into sectors, offering free seating, allotted chairs as well as shared or private boxes arranged along the length of the Sambadrome. The cheap seats are located at the end of the Sambadrome in sectors 12 and 13 which have the worst view of the runway but undoubtedly the best atmosphere and is a very local experience. A visit to the Sambadrome though is all about viewing the parades so the closer you can get the better.

In the free seating areas, the arquibancadas, sectors 5, 6, 7 or 8 offer generally the better views of the runway. These are concrete bleachers and can be relatively busy but comfortable nonetheless. Sector 9 is a specific tourist sector and although the seating is still on concrete bleachers, specific spaces are marked out so that you have your own allocated spot and it’s less crowed than the other sectors. Between Sector 9 and Sector 11 the drummers stop in front of the judges so there two sectors always have a lively atmosphere. The sectors give an excellent panoramic view of the runway.

For a real close up view the frisas or camarotes (the shared or private boxes) are the place to be and the paraders are within touching distance.

The frisas are located in front of the sectors, at ground level, next to the Sambadrome runway. They offer a great close up view of the parades and excellent photography opportunities. Row A of the frisas are very popular and book up early.

The camarotes sell out fast and are popular with Brazilian and international celebrities and the place to be seen during Rio Carnival. A seat in a box comes with all the food and drink you can consume.

See the map of the Sambadrome below for a seating plan. 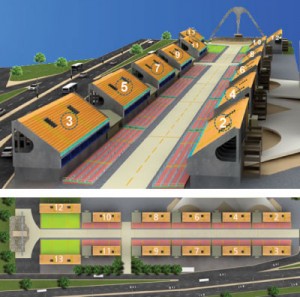 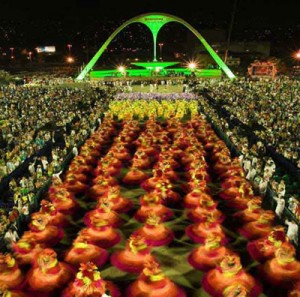 Taking part in the Sambadrome parades

At Bespoke Brazil we have participated in the parade and can confidently say this is the best thing we have ever done! We can provide you with your costume (which you get to keep) and take you to your samba school. What follows is roughly an hour of non-stop dancing and sweating in front of a crowd of almost 100,000 people all cheering you on to the finish line which you hope will never arrive as despite the heat and exhaustion you won’t want your experience to end. If you want to experience Rio Carnival, then experience really being part of it. You won’t regret it! 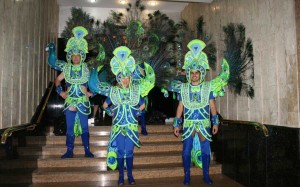 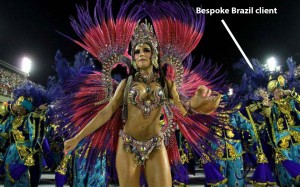 We specialise in offering trips to Rio Carnival and have years of experience planning and operating carnival trips. We can offer trips to carnival alone or as part of a larger holiday to Brazil.

Go to top
MAKE AN ENQUIRY

Rio Carnival 2020 Rio Carnival is the biggest party on earth and a bucket list experience.
8849
Luxury holiday to Ri... A luxury tailor-made holiday to experieince Rio Carnival, Iguassu Falls and...
1230