9 months today until the battle to be the top Rio Samba school begins!

Home » Other » 9 months today until the battle to be the top Rio Samba school begins! 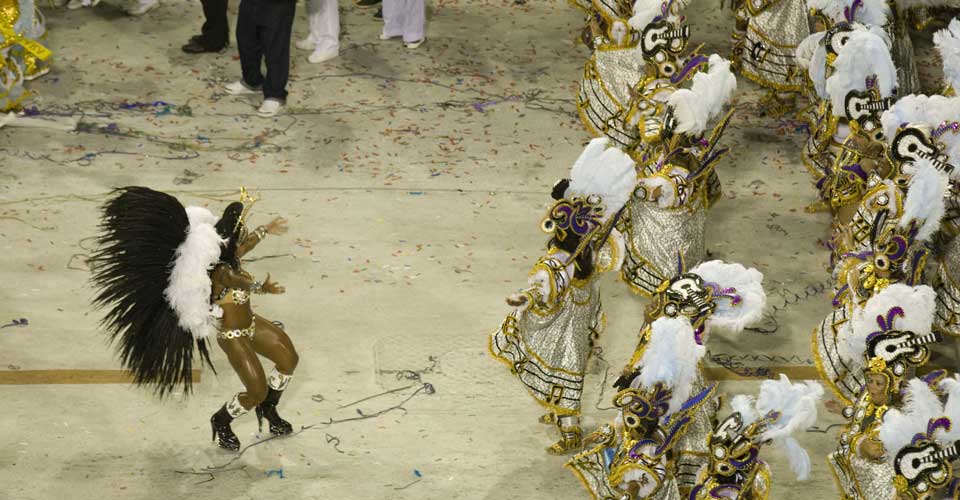 It only seems like yesterday that Rio Carnival 2012 finished and yet in 9 months today six of the best Samba schools in the city will kick off two nights of intense competition at the newly redesigned Sambadrome.
For the uninitiated, Rio Carnival is the biggest party on earth. For the best part of a week the majority of Rio de Janeiro shuts down to enjoy themselves with family, friends and anyone else they can find. Costumes and cross dressing is all part of the course as hundreds of locally arranged street parties take place throughout the city. These street parties (or blocos) can attract up to a million people at the biggest events such as Cordão da Bola Preta, one of the most famous blocos. We will blog more about the individual blocos nearer to the time that carnival approaches. 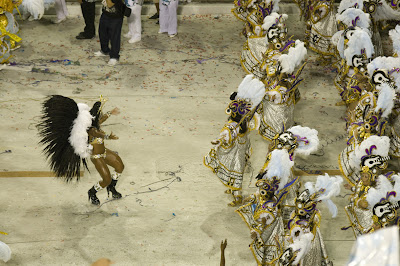 The main event takes place in the Sambadrome, the stadium of Samba, located in the centre of the city close to Central station. The Sambadrome was designed by Oscar Niemeyer, Brazil’s most famous architect and built in 1984. In 2011 the Sambadrome received a long over due makeover and expansion which has greatly increased the capacity. For the majority of the year the Sambadrome lies dormant and unused however when carnival begins the area lights up and a magic fills the air.

For spectators there are numerous seating options. The Sambadrome is split into sectors, offering free seating, allotted chairs as well as shared or private boxes arranged along the length of the Sambadrome. The cheap seats are located at the end of the Sambadrome in sectors 12 and 13 which have the worst view of the runway but undoubtedly the best atmosphere and is a very local experience.

A visit to the Sambadrome though is all about viewing the parades so the closer you can get the better. In the free seating areas, the arquibancadas, sectors 5, 6, 7 or 8 offer generally the better views of the runway. These are concrete bleachers and can be relatively busy but comfortable nonetheless. Sector 9 is the tourist sector which is more spacious and has more facilities but at a higher cost and with a slightly less passionate crowd. For a real close up view the frisas or camarotes (the shared or private boxes) are the place to be and the paraders are within touching distance. The boxes sell out fast and are popular with Brazilian and international celebrities and the place to be seen during Rio Carnival.

See the map of the Sambadrome below for a seating plan. 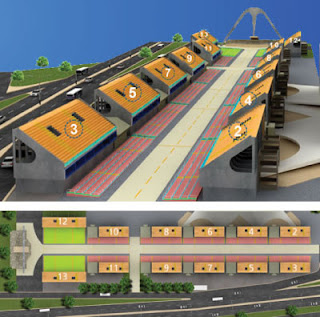 The Samba schools start utilising the Sambadrome for practice in the weeks leading up to the start of Rio Carnival and the fun begins on the Friday night with the children’s samba parade which isn’t taken so seriously but very enjoyable.
The real competition begins on the Saturday. Much like football leagues, the samba schools can face promotion and relegation with all the schools aiming to be part of the special groups which parade on the Sunday and Monday and are the crème-de-la-crème of the samba schools. More about them in a moment. On the Saturday the schools in Access Group A parade. There are generally 10 schools that take part and these are aspiring to gain promotion to the Special groups. The winner of the Access Group A will take their place in the Special Group the following year. On the Tuesday roughly 14 smaller schools make up Access Group B with the winner looking for promotion into Access Group A. 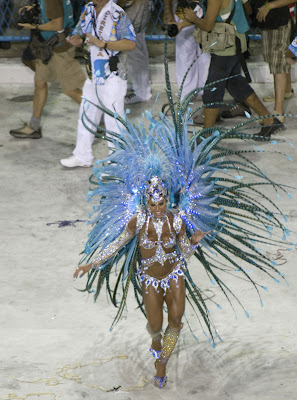 The two big nights during carnival are the Sunday and the Monday nights which are big news throughout Brazil. During these 2 nights the top 12 samba schools parade, 6 on the Sunday and 6 on the Monday but in no specific order with the show being covered live on Brazilian TV from its start at 9pm each night to its finish at about 6am the following morning.

Each school consists of around 5000 participants with a variety of sections which we will blog about in the future.

Each school then has between a minimum of 60 and a maximum of 82 minutes get the first member of the samba school across the start line and the last member across the finish line.  The schools will do their best to get their last participant across the finish line just as the clock strikes 82 minutes which will be met my rapturous applause by the 80,000 strong crowd. The schools are then judged in 10 different categories between by a variety of judges spread along the Sambadrome runway. The schools are judged on the following criteria;

Bespoke Brazil offers you the chance to visit the Sambadrome. We can arrange tickets and guides, if necessary, in any of the stands or private boxes. We can also offer you the opportunity to dress up, join a samba school and take part in the parade which is a real once in a lifetime experience. 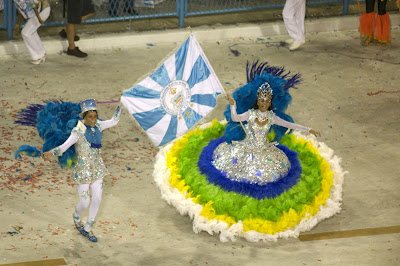